“Pain in the abdomen. Splitting Headache. Nausea and vomiting. Choking and couldn’t get their breath. Coughing up blood.” Phone calls like these broke the dawn of a fall day in the mill town of Donora, Pennsylvania back in October, 1948. Already two had died and another 18 were soon to follow. The death toll would have been far higher if not for a couple brave firemen filling oxygen tents as quickly as they could. Still, no one was quite sure what was going on. Only later would it be discovered that the thick smog covering this Appalachian valley was due to a severe temperature inversion. Its killer characteristic? Fluoride. 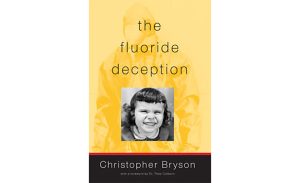 Few public health issues in American history have riled people quite like fluoride. Its story is replete with famous figures in American history, dramatic tales from the Manhattan Project, corporate cover-ups, redacted research, shattered careers of those that spoke against it’s use and the tragedy at Donora in 1948. The tide that binds all these accounts together is a fascinating book called, “The Fluoride Deception” by Christopher Bryson

. His work paints a picture with enough intrigue to be nominated for an Oscar but remains deftly aware of itself long enough to stay away from hyperbole – most of the time at least.

Fluoride, The Way Low Down 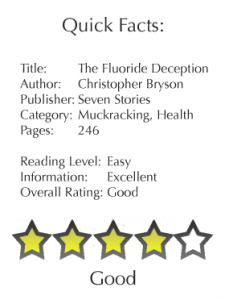 The Fluoride Deception by Christopher Bryson

Bryson takes his readers on an exhaustive journey of the molecule through the eyes of those that have known it first hand. We learn the perils of researching the subject from carefully placed protagonists like scientist Dr. Phyllis Mullenix, whose entire career was derailed by publishing information about fluoride’s neurotoxic effect at disturbingly low concentrations [1], and Kah Eli Roholm, a Danish pioneer in the research of fluoride’s effects and publisher of the groundbreaking work, Fluorine Intoxication [2], back in 1937. Shady, villain-like characters named Dr. Harold Carpenter Hodge and Dr. Robert A. Kehoe act as provocateurs in the background, silently pushing a pro-fluoride agenda with their work – at the behest of the Department of Defense’s Manhattan Project and major fluoride users like US Steel and Alcoa.

Intrigue is definitely a current running through the text – and it helps readability. Bryson works hard at establishing the links between the industrial uses of fluoride and its eventual role in water fluoridation. His case is circumstantially strong as the middle of the book describes the legal wrangling mill workers would endure to get compensation from corporations using fluorides industrially in the workplace. But what comes away as the most surprising aspect of his account is how the type of fluoride used in water fluoridation is actually just fluosilicic acid, a toxic byproduct of aluminum smelting and other heavy industrial processes. It becomes clear here that the waste is being dumped into the water supply in lieu of having to dispose of it in some other way.

Given most people’s proclivity for considering fluoride as a beneficial tooth decay reducer, his evidence is both striking and damning. You can reserve judgment temporarily against toothpaste, as it uses sodium fluoride as its preferred molecular combination – not fluosilicic acid, but still take a moment with the thought of people using the water supply as a dumping ground. For just for this insight alone, you would be remiss not to pick up the title. However, for those of you with a scientific nose, it is the moment just after you make the connection between water fluoridation and fluoride’s industrial uses that will both haunt and fascinate you as the book continues. It will also be the moment after which this book’s value to the discussion notably decreases.

Once you wrap your head around the arguments Bryson is making in the book, it starts to fit the vicious battle some people wage against water fluoridation. For the most part, the battle against fluoride is mostly a cold war, although the occasional community, like Southampton in the UK recently, will organize itself in protest of water fluoridation. Frankly, it’s amazing more hasn’t been said here in the US about its use, although there is certainly an underground resistance to its use, spearheaded by the Fluoride Action Network.

Part of the reason for mass acceptance of fluoridation has been the glowing endorsements given to it by the American Dental Association and the CDC, with the CDC calling water fluoridation ‘one of the ten greatest public health victories of the 20th century‘. The FDA even allows bottled water products that use fluoride to market health benefits from its use. 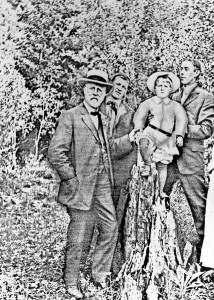 Dr. Frederick McKay, the first person to make the connection between fluoride and cavities

This evolved agency view comes from a series of observations by Dr. Frederick McKay throughout the early 1900s that showed areas in the Western US, where calcium fluoride levels in the water are naturally higher, exhibited stained teeth with far less decay than areas with less fluoride in the water [3]. Landmark studies corroborated these views, especially the 1945 study involving the first test case in Grand Rapids, Michigan that showed adding sodium fluoride to water resulted in up to 54% fewer cavities [4].

All of this early science on the subject was an issue Bryson mostly avoids, to the book’s detriment. In fact, the way the science is presented is confusing. Fluorides are brought up haphazardly and never fully explained. What are chemical differences between fluoride (the ionized molecule), fluorine (the element), fluoride salts (the compound found in toothpaste), calcium fluoride (naturally found in water) and fluosilicic acid (the waste product often added to fluoridate water)? Given the science we have on fluoride’s neurotoxic effects, could it play a role in the autism epidemic? How does this relate to ADHD, Alzheimer’s, MS – or any neurological disorder for that matter? Fluoride ions have an affinity for calcium in bones, how does fluoridation relate to osteoporosis? The audience desperately needs these type of answers but we never get them.

What we need is a more nuanced dialogue about the role of fluoride in the body, not less. Bryson should have embraced the controversy a bit more here and explained these different avenues of thinking instead of simply leaving the science of his opposition out of the text. It severely detracts from what this book could be.

Fluoride science has evolved further since this work was published back in 2006. There are now epidemiological studies examining the role of fluoride and bone fractures, with mixed results in low exposures (like the 1ppm rates CDC aims for in US public water system fluoridation) but more conclusive, damaging results in slightly high 2-4ppm window [5]. It’s still unknown which ethic groups could be most at risk from bone fractures though. More disturbing has been the development of studies that confirm fluoride (along with arsenic) has serious effects on the brain [6, 7, 8], lowering IQ in SE asian children. Again, these effects are seen in the higher 2-4ppm samples of fluoride, rather than the 1ppm exposures most Americans are seeing, but any time a substance causes neurological damage further study should be considered mandatory.

Advancing from this epidemiological base, one Chinese study group has recently isolated fluoride’s neurotoxic target as the hippocampus in the brain [9, 10], giving future researchers a tangible ‘fluoride pathogenesis’ to work with here. The hippocampus governs many of the higher cerebral functions of humans like memory storage and spatial orientation; any damage to it could cause a number of different, severe neurological issues – similar to the epidemiological observations showing impacts to IQ from SE Asia.

Even before this new evidence was published, the EPA and the National Academy of Sciences have been reexamining the data surrounding water fluoridation since 2006 . The EPA sets a maximum contaminant level (MCL) and a secondary maximum contaminant level (SMCL) for all water contaminants; effectively the MCL is the ceiling and SMCL is the least amount allowed. For fluoride that range has long been 2-4 mg/L in drinking water but the National Academy agreed that skeletal issues were found from fluoride exposures at levels as low as 1.5 mg/L, nearing the CDC’s water fluoridation targets of 1ppm.

*We would like to note that 1ppm is equivalent to 1mg/L and they are often used interchangeably in the research. It should also be noted the National Academy mentioned they choose not to examine fluoridation’s effects at .7 – 1.2 mg/L – the CDC’s target range – for reasons that go unmentioned but could easily be implied. Further, all figures here are per liter fluoride exposures that downplay the actual fluoride exposures many people will be exposed if they follow the Institute of Medicine’s (IOM) 3.7L/day water intake recommendation. Taken together, the average CDC fluoridated water range exposure (.95mg/L) multiplied by IOM’s average daily water intake (3.7L) would give the average American 3.515 mg worth of daily fluoride exposure – a figure that falls in the National Academy’s range for concern for skeletal problems and the recent IQ-reducing fluoride exposures from the Chinese study group mentioned above.

Moving Through the Fog

We gave you an overview of science surrounding fluoride here because it is complex – and evolving – but the fact Bryson remained silent on the matter, only pounding the conspiratorial angles of this drama, strikes us as foolish. While that makes for a juicy read, storming Alcoa for reparations will not help well-meaning scientists establish fluoride’s true toxicity. Echoing Bryson’s sentiments, we do agree that the industry connections are important to understanding the depths of this story. The fact CDC, FDA and ADA all remain in lockstep behind water fluoridation, even in the face of this new science, is disturbing. And for all we know, the avoidance of fluoride science could have been an editorial decision on his part or his publishing company but, with such charged subject matter, that was an exceedingly poor choice. We just wish he had done more to further the conversation, just as we wished Food Inc. had extended the sustainable agriculture dialogue in a meaningful way (it did not).

You could easily question Bryson’s objectivity when you read the book but you shouldn’t. Large passages pull from Bryson’s muckraking journalism background and you can almost feel the resentment he has towards those that have fluoridated our water. But he keeps himself in check very well. This stance creates a tone that is both a strength and weakness for Bryson. If you gravitate towards social justice issues, you will soak up this book’s charged approach; the more scientifically minded amongst you might find his angles off putting and his lack of science infuriating. We were somewhere in the middle, we found ourselves enjoying his style but longing for a more exhaustive scientific review somewhere in the text.

In general, Bryson does a masterful job of weaving political intrigue into an exceedingly readable text considering the subject matter. He creates a story with genuine heroes and villains you may find yourself thinking about long after you put the title down. Experts will surely find fault with Bryson’s work, especially on the scientific front, but if your only exposure to fluoride is the cursory knowledge of its presence in your toothpaste or water, you would be wise to visit this text. We recommend it.