Have we figured out what is causing honeybee colony collapse disorder?

The New York Times recently reported on a new discovery in understanding the devastating phenomenon of bee colony collapse disorder (CCD).  Apparently a cocktail of a rare fungus and a virus have been teaming up to decimate bee populations. From the article:

A unique partnership — of military scientists and entomologists — appears to have achieved a major breakthrough: identifying a new suspect, or two. […] Research at the University of California, San Francisco, had already identified the fungus as part of the problem. And several RNA-based viruses had been detected as well. But the Army/Montana team, using a new software system developed by the military for analyzing proteins, uncovered a new DNA-based virus, and established a linkage to the fungus, called N. ceranae. 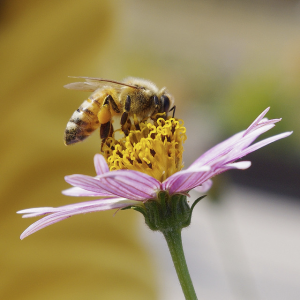 The big breakthrough here was identifying the virus using the Army’s new software.  In combination with the fungus, the new virus – dubbed IIV – was able to wipe out bee hives with 100% efficacy.  Scientists are still not completely sure the sequence of events or even why this started happening to American honeybees and not Australian variants, for example.  But this research is a major breakthrough for an industry that is responsible for pollinating most of the food plants we eat.

Some background on CCD: This issue has now been with us for a number of years.  Starting in the winter of 2006-2007, beehive keepers started to notice an increasing number of bees simply fly away from their hives and die.  The problem has continued through the 2009 season with little success in identifying what was happening.

We have seen theories ranging from an increase in electromagnetic pollution affecting the bee’s navigational abilities, to increased pesticide exposure for the bees,  exposure to GMO flower nectar that was supposedly interfering with their biological system (somehow) and some argued it was a milieu of all these factors.  The virus + fungus research we have here is by far the most convincing argument to date.

This latest study was published in the open access journal PLoS ONE, which means we get to read what the findings say! 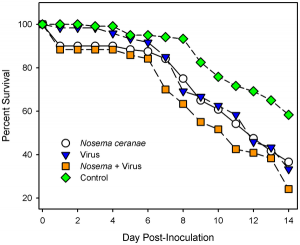 Inoculation of Bees: A Comparison

The scientists used bee proteins from the initial 2007 outbreak, an additional 2009 outbreak in Florida, unaffected Australian bees,  and even had a control group of bees from Montana which showed no CCD characteristics.

The findings show IIV in over 75% of all the bees but that it didn’t cause a major problem unless it was mixed with the fungi from the genus Nosema.

The researchers then took young bees whose fed was inoculated with IIV + Nosema fungus, just IIV and just the fungus and watched them.  They found the combination of the two was a complete knockout, taking down 100% of the newly emerged bees tested.  Researchers also showed that bees could still be able to survive a Nosema infection and survive but with IIV, they are overcome.

How all of this comes together in nature is a still a mystery to be unraveled in future studies but it is clear from this study that IIV discovery is a huge step forward in turning the corner on this problem.