The October 2010 edition of Popular Science landed in my mailbox today with a brief overview of the genetically modified Enviropig.  I would give you a direct link but, for some reason, Popular Science does not publish its magazine articles online.  It’s not that big of a deal because the article isn’t even good enough to carry a byline.  But it got me thinking.  GMO animals are here…so let’s review where we are at. 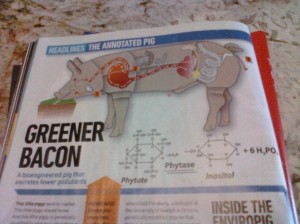 The picture from Popsci

The story briefly highlights the work of Cecil Forsberg a biologist from the University of Guelph in Ontario, who wanted to spare the environment the impact of pig farming.  The problem with swine CAFOs is they produce huge amounts of waste that are stored in so called ‘swine lagoons‘.  These open air pig waste ponds have been the subject of much debate, with the EPA studying them for polluting ground water with estrogenic compounds while the hog farming capital of the world, North Carolina, has gone so far as to ban their new construction outright.  But the real problem with the pig waste is what happens once it leaves the lagoon. 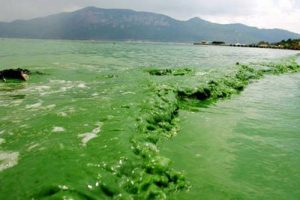 Too much algae comes from swine effluent

Much of swine effluent is sold as a spray on fertilizer for crops near the hog farms because of it’s high NPK values (ag talk for Nitrogen-Phosphorous-Potassium levels, critical to grow American corn and soy agronomic crops).  This concept makes logical sense and could even promote regional foodshed growth as a cheap form of nutrient dense fertilizer that comes from a natural source.  The problem is the volume of waste from giant hog farms far outstrips the local farmland’s ability to use it.  Most notable, is that phosphorous runoff from the pig waste finds its way into sensitive waterways where it promotes runaway algae growth that chokes off aquatic life from the oxygen it needs to survive, a process known as eutrophication.

Domesticated pigs eat a largely vegetarian diet of grain and soy that contains prodigious amounts of phytate, a complex compound their bodies cannot normally break down, causing these high phosphorous levels in the waste fertilizer.  Pigs still need phosphorous to make DNA so farmers solve this issue by buying free phosphorous for their pigs or supplementing with an enzyme called, appropriately enough, phytase.  But what if that was all unecessary?  What if the pig made phytase itself?

Forsberg, et al, have genetically engineered these Yorkshire pigs to produce phytase in their salivary glands, which breaks down the phytate into usable phosphorous for the pig.  The result?  30-65% reduction in phosphorous excretions. Enviropigs cost more than traditional breeds but, according to the Popsci article, save farmers $1.75 annually in supplementation costs – a big savings in the world of livestock production.  In a CAFO with 100K head of swine (which unfortunately aren’t going anywhere anytime soon), this would be a huge win for the marine environment, currently being decimated by many forces.  The pig awaits USDA and Health Canada approval as it has now successfully been breed into an 8th generation with no problems.

GMO animals represent a promising new way to deal with the industrial scale of modern agriculture issues.  We say promising because, like always with genetic modification, the ideas are great but the implementation has left something to be desired.  It is heartening to see that the Enviropig was developed at the university level and not the corporate level, avoiding such pitfalls as the infamous terminator genes in some Monsanto GMO products.

It still strikes us as counterintuitive to create such a technology when simply lowering the density of swine at CAFOs would achieve the same effect.  Better yet, we could require CAFOs to treat swine waste much as we require cities to treat human waste before releasing it back into the environment.  Nevertheless, this is just one of many GMO animals to come and its a promising start.