Ezra Klein’s excellent blog on the Washington Post website highlights a Politico story today about the status of the long awaited food safety legislation (s.510).  It is currently being held up by one senator, Tom Coburn (R) of Oklahoma.  Here is the latest:

Coburn’s office confirmed to POLITICO on Tuesday that the Republican is objecting to moving forward with the bill on the grounds that it will add to the burgeoning federal budget. Coburn has become the GOP champion for demanding that legislation be fully paid for, staging or threatening filibusters this year on legislation ranging from war spending to unemployment benefits. 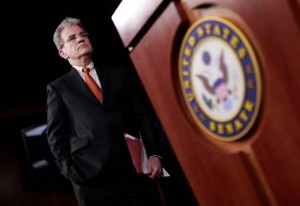 Coburn’s analysis of the bill seems a bit off.  A lot has been made of how the bill will effect farmers precisely because it puts so much of the cost of the new legislation on those who are being inspected (see our past coverage).  In our 2009 analysis of the house bill, we found that the FDA would earn roughly $200 million dollars a year from inspection fees, which would largely offset the cost of the legislation, although not entirely.

Coburn’s stand seems mostly obstructionist ahead of 2010 congressional races.  There is a significant groundswell against further deficit spending, especially in rural America, but there is also significant unease about the food supply in the wake of the peanut butter and spinach scares of the last five years.  The delicate balance of fees in this food safety bill was ironed out over the course of two years and it doesn’t make sense for Coburn to stand in the way of it now.  Except for the fact that he is a junior senator running for his reelection in a couple months…

And remember, this is a bipartisan bill.  These are easier to pass.

UPDATE: A just before the weekend note from Senate Majority Leader Henry Reid: Coburn’s position means the bill will likely not be taken up before the election in November.  What a coincidence…