The latest examination of obesity rates by the CDC comes to some sobering conclusions about the state of public health in America. Their findings show a block of states, mostly concentrated in the South, now have obesity rates over 30%. Back in 1990, no states were over 20%, making the run-up in the last 20 years remarkable.

The Journal of the American Medical Association gave us the most recent update on obesity earlier this year from the highly respected NHANES data set about the 2007-2008 obesity timeframe. They came to slightly more upbeat conclusions, finding that the incidence of obesity in America was over 32% and still increasing but at a slightly slower rate. They had some other interesting tidbits, especially about how these trends date back to the civil war in the 1860s:

In the United States, a study of data from military recruits, veterans, and national surveys suggests mean BMI has increased over a long period since the Civil War up to recent times, with increases in the last several decades perhaps less steep than those observed earlier.25 Over the period 1960-1980 (covered by the earliest NHANES surveys and the National Health Examination Survey), obesity prevalence was relatively stable, but then it showed striking increases in the 1980s and 1990s. The data presented in our current study using 2007-2008 data suggest that the prevalence may have entered another period of relative stability, perhaps with small increases in obesity, although future large changes cannot be ruled out. Because relatively little is known about the causes of the trends previously observed, it is difficult to predict the future trends in obesity.

The CDC’s latest numbers update us for the 2009 calendar year, finding that the growth is accelerating again, possibly exacerbated by the dire financial situation many people found themselves in because of the recession. As we mentioned earlier, the rate of obesity is significantly over 30% for the entire nation now, and nearly 35% in the south. In certain ethnic groups, especially black and hispanic groups, the rate is bumping up near 40%. Remember, obesity is defined as being more than 30 pounds overweight in this survey – if we were also counting overweight people, which is generally considered more than 10 pounds overweight, we these numbers could be double what is being reported here. 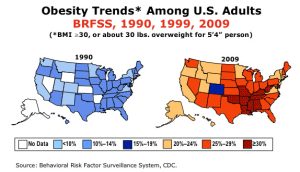 What is Causing this Surge?

While the usual suspects of diet and exercise are implicated in this rise, other research is coming to light on the subject. Just yesterday a new finding came out that suggests obesity may be related to a virus contracted during childhood. This virus, adenovirus 36, belongs to the larger class of adenoviruses that can cause a host of problems like eye infections, GI tract irritation and respiratory infections. What makes adenovirus 36 unique is that it infects fats, making it the only known virus to do so.

The study in the journal Pediatrics shows a correlation between having adenovirus 36 and being obese but it does NOT show adenovirus 36 causes obesity. This implies that the virus will may be able to attack an obese person due to a suppressed immune system or some other avenue; the researchers do not go into the causation subject in detail so it is hard to say. They emphasize this study is a starting point but it shows interesting promise in understanding childhood obesity.

Where does it go from here?

Given the gravity of this issue and the cost it is putting on the nation (and the world for that matter), major research dollars are being thrown at understanding the issue. I’m just not confident they will find very much here. This is a multifaceted issue – problems such as inactive work lives, the proliferation of car-culture and suburbia, fast food, bad diets and a lack of exercise are all playing a role. It is hard to tease out exactly which factors are the most important to pay attention to in the data sets because this situation is now so widespread. I think the research will get more specific moving forward, as we are seeing with the concentration on the adenovirus angle with children, the genetic dimension with minority groups and lifestyle choices with middle america. But obesity, at the end of the day, is an input/output issue – if you burn more calories than you consume, you will lose weight. Getting people to do that is a whole different story.

Tomorrow, we will reexamine high fructose corn syrup’s role in obesity in light of some new research.