Food. We all eat it. But only a select few know how it is produced. Food Inc., the first full length movie from the PBS documentarist Robert Kenner, aims to teach everyone how their food got to their plate – and it succeeds in spades. Dark chicken coops with 300,000 birds, illegal workers being recruited for hog slaughterhouses, feed lots bigger than Rhode Island – its all here in depressing detail. But for those of you that have already been sinking your spades into various organic gardens, Food Inc. will leave you wanting more. A lot more.

The movie takes you through a a loosely constructed narrative, trying to explain how we got such an industrialized agricultural system in the United States. Eric Schlosser, author of Fast Food Nation, sets the tone as he describes how we have gotten to where we are today, in a similar way to his book. The answer, in short: Fast Food. 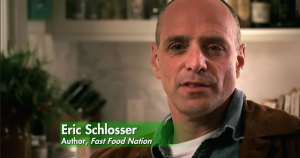 Companies like McDonalds, Burger King and Wendy’s require so much food as inputs for their operations that they have effectively shaped the system by being the biggest customer. These companies put low prices first, which has gotten us a highly efficient food machine– an accomplishment, which some in the movie are understandably proud. The basic message is that when you go to the supermarket, you are basically eating the leftovers from the fast food industry. Not light stuff.

After some disturbing tours of the industrial food system and the e.coli food borne illnesses they breed, we get shown how the various companies use illegal workers in very dangerous working conditions. With the graphic imagery, this part of the movie seemed to really hit the audience; the people we were with who had very little idea what was going on in the slaughter houses of America were particularly moved by this sequence.

In a slightly more upbeat sequence, Michael Pollan makes his grand entrance. We get walked through Joel Salatin’s Polyface Farm from Omnivore Dilemma’s fame and, more generally, introduced to many of Pollan and Co.’s ideas on how proper agricultural practices should take place. Open air slaughter, pastured animals, and a very low tech approach appeals to our agrarian roots as a country. Salatin himself is worthy of a movie. 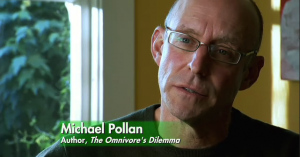 But you have to wonder, anyone interested in this subject has at least heard of and probably read Michael Pollan’s book Omnivore’s Dilemma. For better or worse, Pollan’s portion of Food Inc. is the theatrical adaptation of the now famous book. This part of the movie will open some eyes but we wonder how many given the almost four years that has lapsed since its publication.

As much as we enjoyed this journey (which was rounded out by another corporate shellacking – this time Monsanto and its role in the seed market) we found the movie’s sections were only vaguely related to each other but it was not to the point that it made the movie unwatchable. Each section stood on its own in an internet-youtube-sort-of way. It worked but organizational structure was not this movie’s strong point. Devastating content was – and for that reason alone, you should see this movie. You would be hard pressed to get a better look inside the food system without some very important friends – and they probably wouldn’t even let you take pictures. But not all is perfect with this film.

The Real Question at Hand

If you peel back the thin (and we mean razor-thin) veil between the hate you can feel the producers have for these agribusiness corporations, you can see this movie more properly as a critique of the relationship between corporations and government. Even though agribusiness is included in this film (Monsanto even claims they wanted to be in the film – dubious claim), the real question raised in this movie has nothing to do with food and everything to do with politics:

‘What role should corporations have in determining how government regulates them?’

It’s the 500 lbs gorilla in the room that Schlosser and Pollan do not address. Food Inc. never formally argued for extensive regulation of the system at every turn but its often implied. The movie does however advocate for an almost complete return to the Jeffersonian ideal of agrarian America – where each American (or a sizable legion of small farmers) tends a little farm in harmony with nature. And that’s where Food Inc. begins to fail.

As a documentary illuminating a subject, Food Inc. has few equals – maybe An Inconvenient Truth or Enron, The Smartest Guys in the Room but little else can match just how artfully Robert Kenner has constructed the message here. As for the real rallying cry the sustainable agriculture movement has been longing for, Food Inc. silently passes. The film never formally makes its case for advocacy or policy and only throws a few casual suggestions to its audience as the film’s credits commence. Traditional farmers are made to look especially foolish in the film – almost vilified as poor and helpless, groveling at Monsanto’s feet for scraps. 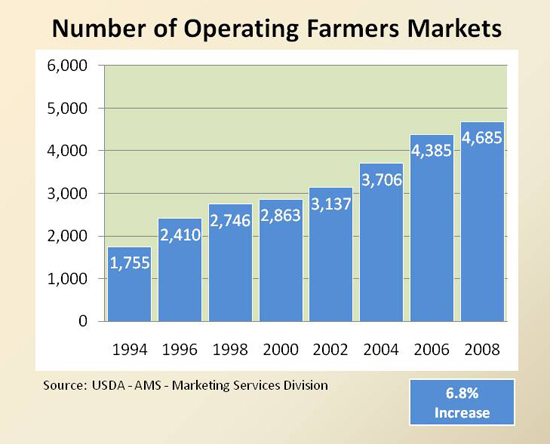 How could this have been left out of the movie?

These critiques are outdated and the conversation should be moving along with the movement. Frenetic growth in farmer’s markets and organics over the past five years seems almost like an afterthought to this film. Outside of the Stoneyfield Farm aside in the film, this heavy tone of despair was unnecessary when there is some serious success to celebrate. Many farmers across America have taken up the challenge against industrial agriculture Food Inc. calls for, certified themselves organic and are pioneering a new way forward. Food Inc. is again silent on this now gigantic movement, only briefly profiling Polyface Farms.

During a Q & A after the movie, many of these critiques were brought up and not answered very well by Pollan or anyone else in the panel. Maybe this criticism is too harsh, as this movie never claimed to be anything but a trip into the world of industrial agriculture. But with so many high powered people involved in the film from within the movement, we had hoped for more.

Worth the Price of Admission?

It all depends on who you are. If you are just getting into these issues, by all means, run over to the theater. But will you even be able to see this movie? Documentaries almost exclusively play to arthouse cinema crowds – theaters that are typically in larger, liberal cities all with audiences well versed in these issues, as was our DC audience on the whole.

With that said, the real commercial audience for this movie is a bit unknown to us. The sustainable agriculture crowd will be there, of course, but who else? Middle America needs to be there but we aren’t sure it will even get air time in Wichita, Kansas or Amarillo, Texas, nor are we sure that the corn farmers and ranchers there would even want to see their livelihood disparaged on such a scale.

Even with these critiques, this movie should be seen if it is playing near you – especially if you have little knowledge of industrial agriculture. The movement Food Inc., is trying to spark already exists in fragments across America. Sustainable agriculture is so young and fragile, trying to achieve so much as a movement, that it moves in many fits and starts. Food Inc. may be the brightest ray of sunshine we have seen yet but we are still staring into an abyss.