Welcome Rachel Zedeck of the Medea Group who explains to a Western Audience some of the problems going on in Eastern Africa, specifically how an inadequate agricultural system fails its own people.  She puts forward a new solution – the Backpack Farm Program – and explains how it could help the people.  Rachel will be regularly contributing her advice and experience on developing sustainable agricultural systems using a microfinance model in Eastern Africa.

It was late in 2007 when I first arrived in Southern Sudan by way of Kenya, to research a new model of socially responsible agricultural development. Within a year and half, I was emotionally raw and physically exhausted. My personal battle with African development models had taken its toll. Even with several years of field experience in post conflict countries, I was ready to quit and crawl home. 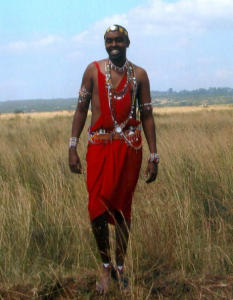 Then, I got into a taxi driven by Mr. Moses Lenchula Lenkupae.  Well dressed, soft spoken and polite, I immediately felt safe in his presence.   Perhaps this was because Moses is a Maasai warrior from Samburu, an arid and picturesque region 7 hours drive from Nairobi.

Well educated by Kenyan standards, he came to Nairobi to drive a taxi because it was the easiest way for him to find employment.  He explained to me that as the eldest son in his family, he needed to help support his mother, 7 brothers and sisters – and now his father’s second wife and two newborn babies.

Immersion Comes at a Price

During the following months, I learned more about his family as well as the plight of the Maasai people in Samburu.  Both groups regularly face raids on their cattle from the neighboring Turkana, Pokot and Borana tribes as well as corrupt police units regularly spilling over into bloodshed.  Just last week more than 21 Samburu Maasai were killed in tribal violence.

But the Maasai have struggled since the turn of the century when a viral epidemic killed large herds of cattle and goats.  This tragedy was followed by severe drought caused by successive years of short rains.  Over half of the Maasai and their animals perished.  Soon after, more than two thirds of Maasai lands in Kenya were taken away by the British and Kenya governments to create settler ranches, which are now the well trodden wildlife reserves and national parks of both Kenya and Tanzania. 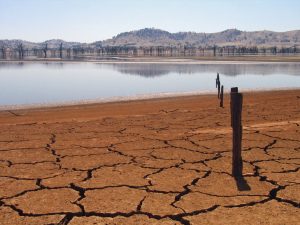 Drought, a common site in the Horn of Africa – thanks to suburbanbloke on flickr

In 2009, severe drought is once again killing Maasai herds in Samburu. The damage extends throughout Kenya’s pastoralist regions, including Mombassa and the arid North East Province (NEP).  Herds of animals are being brought into the cities despite the drought, but they are often sick and dying animals, too weak or poor quality for sale.  That has sent the prices of cattle, goats and sheep plummeting, sometimes more than 80%.  Local herders have little recourse since they do not know how to diversify their business models during high risk months.

But still Moses continues to drive his taxi through town either in a well pressed oxford and tie or his traditional red robe and beads.

The pain doesn’t stop there for Moses or East Africa though.  As a result of drought and short rains, the region’s grain belts are simply not producing enough grain to support regional demand; coupled with disproportionate demand for food aid to support humanitarian emergencies in Ethiopia, Kenya, Somalia, and Sudan (North and South). In the last 18 months, the grain prices in the East Africa region have fluctuated wildly with average maize price in 2009 some 20-60% higher than historical norms. 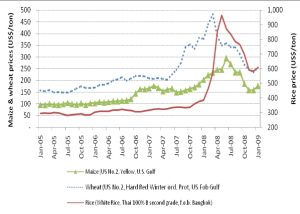 Dramatic PRice Fluctuations in Staple Crops, image thanks to isivivane.com

These numbers represent more than simple price fluctuations or the impact of drought, but also the region’s integrated vulnerability.  If one country in the East Africa region suffers from short rains and a weak harvest, then the region suffers as a whole.  But there are those of us who believe there is always hope.

With an estimated 100 million small landholder farmers in East Africa and an additional 25 million in South Africa, these farmers represent a tangible, practical solution to the region’s food insecurity while increasing rural income as well as impacting the GDP in their prospective countries.  How to turn more than 100 million farmers into a productive food system for Africa, capable of overcoming regional conflict and drought, has been out of reach. These economic problems become more real when you see them up close.

My friend Moses’ sister Rose was brought to Nairobi last year with acute Malaria and almost died.  There is only one clinic in his community and it refuses to treat anyone who can not prove they can pay at the gate before entering the compound.  Luckily Moses can help provide with his taxi income but many others cannot.

Ideally the community could fund their own health clinic, providing the services they need at prices they can afford.  But none of that can happen amidst famine, where entire families struggle to survive. Western safety nets are unknown here and the people of this region need to be earning enough from either cattle or subsistence farming to provide for their families.  I don’t want to see another Rose go without the care she deserves, which has driven me to find a solution.

A Practical Solution – A Farm in a Backpack

With both the land and a workforce capable of producing food, my organization began to see that maybe the commercial world could succeed where so many UN and NGO programs had failed before.

In April 2009, after two years of frustration, I finally secured what I call my ‘wonder’ team of agriculture experts. Together we have launched the Backpack Farm Program. The program enhances bottom pyramid value chains which target small landholder farmers’ production models with cutting edge agricultural inputs, training and monitoring. 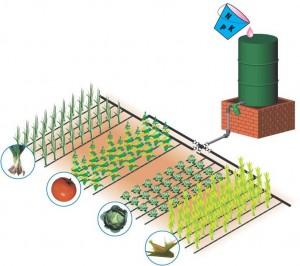 Currently, small landholder farmers lack both the technical capacity and financial equity to enter the wholesale markets – which could substantially alter the food crises of East Africa.  Their yields are typically poor, estimated at one-quarter of the global average leading to insidious hunger and poverty.  To counter the weak production, our partner Lachlan Agriculture designed the “fusion farming” model, a combination of biological products, botanicals and reduced toxicity pesticides.

By eliminating the need for traditional fertilizers, and distributing a customized and cost effective drip irrigation system and training on green water management (rainwater) techniques, we think the Backpack farm model could potentially create a huge shift the mindset of how to develop rural economies and impact Africa’s food insecurity.

Solutions like the Backpack Farm Initiative can’t wait.  I often think about Moses.  While he isn’t rich, he can help his family and saves to expand his business.  His real dream is to attend an American university to study animal husbandry and then return to Samburu to attract new commercial investments in cattle farming.

Moses talks about Samburu like it is his own magical kingdom, one given to him by his ancestors. He reminds me of what real struggle and commitment means in Africa.  I have no right to give up on my dream of being part of the solution to feed Africa when he continues to work 18 hour days to help his family survive.  I hope to help him lead the warriors in his village to build a new future for his people by using the land they have lived on for thousands of years in a new way that is genuinely sustainable for the people of East Africa.