Is the Strawberry the Future of American Agriculture? (Day 1)

Nutrition Wonderland’s first stop of the journey is an exceptionally beautiful place called Oxnard, California. It anchors a rapidly growing area but more importantly, it is the principal city in the Oxnard Plain – one of the most productive agricultural areas in the world. Known as the Strawberry Capital of the World, Oxnard also grows cucumbers, peppers, herbs, oranges, lemons, tomatoes, lima beans – the list goes on. In short, this place is an agricultural mecca.

Still, this community is at a turning point. The same beauty that gives the region bumper crops also jeopardizes its agricultural future. As it turns out, a delicately crafted piece of legislation and high yield crops are all that stands between the region turning into a concrete jungle like formerly agricultural Orange County. We spoke with the California Strawberry Commission in the California Strawberry Festival’s Oxnard office this past week about some of the challenges and opportunities facing their industry – and more generally – agriculture.

The Past into the Present

Carolyn O’Donnell, the Communications Director for the California Strawberry Commission, introduced us to some of the background involved with Oxnard and its strawberries. The community gets its name from agriculture; its named after a pair of sugar beet processing brothers that came to the area back in the late 1800s. Today, the region is home to the majority of strawberry production in the United States, an intensive production of continuing harvests that occurs twice annually.

One of the most interesting points in our discussion came from Sue Odgers, resident of the area for 50 years who has watched Oxnard transform from a 1970s population of 26,000 to well over 200,000 today. The region wasn’t always known for its strawberries as it is today, she told us. The community used to be known as the lima bean capital of the world, along with growing a sizable amount of sugar beets. 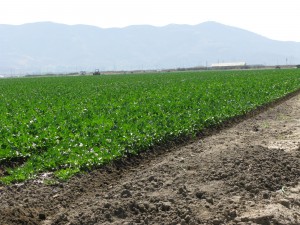 Our tour of some of the farms in the area bear out Odgers observation. We saw many fields of red bell peppers ready for the picking, an incredibly sophisticated tomato hothouse and, of course, some early planting of strawberries. The common theme with all these crops? Higher selling prices at market. After all, strawberries are far more sexy than lima beans.

The move from cheaper crops to high dollar produce mirrored the change in population. Strawberries specifically are a very high dollar crop, so each farm can extract more dollars-per-acre than with lima beans. The switch in crop cover, it turns out, was a vital move in maintaining the area’s agricultural base – and one that could easily be overlooked as other agricultural communities look to emulate Oxnard’s success.

With all the extra strawberry coverage in Oxnard, we asked about pesticide usage, as berries in general regularly score highly in pesticide residues (.pdf link). O’Donnell pointed to continued growth in organics, now over 5% of the crop, and also mentioned that these harvests are inherently more sustainable than other crops simply because multiple harvests can come out of one field in the same year. The Commission is also making a push to replace methyl bromide by funding research into methods that can reduce dependence on the dangerous fumigant.

Connecting to the Community

Sue Odgers, a volunteer who sits on the California Strawberry Festival board, also plays a vital role in connecting the community to its signature crop by helping to organize an annual festival. Now in its 27th year, the two day California Strawberry Festival is a celebration of the food – and the region. Local arts and crafts creators stand shoulder to shoulder with growers, cooks and community leaders. 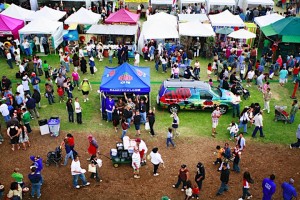 A Picture of the Festival in Action, thanks to the CSC

Attendance is strong and focused around enjoying a variety of strawberry products, the favorite of which is a build-your-own strawberry shortcake booth. Odgers also described the scholarship fund the festival has setup. Now over $1,000,000 strong, the scholarship goes directly to help the children of migrant farms workers afford higher education.

Creating the connection between the farmers and residents of the cities on the Oxnard Plain is crucial so that residents see sprawl as taking away something meaningful from the communities. Such involvement helped the Ventura County region stay ahead of the development as we learned from Annika Forrester, the Food Safety and Grower Communications Specialist for the California Strawberry Commission.

Oxnard’s complex farming past has evolved into legislation to stay ahead of the changes wrought by sprawl Forrester explained. Every 10 years, the state of California requires each county to publish its ‘General Plan’ for land use which, taken together, guide growth around the state. California tends to reinforce suburban style land uses which primarily convert agricultural land into tract home and strip mall development, according to sources inside the planning office we contacted.

Image from the S.O.A.R. Intiative

The first community to actively organize against this planned encroachment was Napa Valley back in 1990, whose voters passed the Measure J. Its legal success against developer’s challenges that went all the way to the California Supreme Court provided Ventura County – home to Oxnard and other agricultural communities – a blueprint for how to protect their lands.

This culminated into the S.O.A.R initiative of Ventura County, an amendment to the General Plan passed back in 1998. The initiative locks in land uses primarily so agricultural lands stay that way. Ventura County went a step further and established an urban growth boundary, appropriately called CURB, that restricts all development outside said lines (Learn More Here). Only a simple majority vote can bend the CURB’s restrictions.

All the members of Strawberry Commission referred to the impact this legislation has had on the region. Without it, it seems beyond likely that many more acres of prime farmland would have been lost to development.

To get people to eat better and practice better nutritional habits, we as a nation must physically have the right foods available for people to eat. Strawberries, along with the myriad of other crops coming out of the Oxnard Plain, are part of that answer. We have all seen the studies associating produce consumption with a reduction in chronic disease [1, 2, 3] – but translating a health answer into development policies is complex and hard to understand at a distance.

From what we saw, the Strawberry Commission is doing a good job of bridging that chasm between frenetic city life and more traditional agricultural farmers with their festival. While we would have hoped to see more than 5% of their total crop as organic, that percentage is surely growing – and its still more important that the crop continues to exist, organic or not. And that’s the real issue facing Oxnard and many other communities – how do we make development and agriculture work together?

Communities will have to assign higher values to agriculture in general. Oxnard is fortunate in that sense. The community came together to draft aggressive legislation that aimed to keep the area’s agricultural history intact. Switching from lima beans to strawberries and other high value crops also helped by driving up the value of agricultural lands, giving local farmers some ammunition against soaring land prices. But not every community can be the strawberry capital of the world.

Balancing population growth while still being able to grow the food for those new mouths will require delicate planning that may change from community to community. Oxnard, with a combination of legislation, community involvement and adoption of higher value crops, is a great example of how to make this work. However, development challenges will continue and forward thinking communities have to get out in front of the issues before land uses change forever.

When we travel up the coast to Santa Cruz, we will explore the other side of this issue: conservation of undeveloped land. The big question we will be asking is how to transition conventional agriculture into a lower impact, sustainable land use that can co-exist with natural open spaces. We will be speaking with the Wild Farm Alliance, the Monterey Aquarium and the University of California, Santa Cruz’s Sustainable Agriculture school to find out how they think it can work.

——————
This is the story from Day 1 of Nutrition Wonderland’s Tour of America.