Researchers at John Innes Centre in the UK have used successfully created a purple tomato by using genes from the common snapdragon flowering plant. Tomatoes natively possess the genes required to make themselves purple but normally these genes lie dormant. By inserting borrowed genes from the snapdragon plant, the researchers engineered the tomato to activate the usually dormant genes. The tomato plant was designed intelligently with promoter sections of DNA inserted in front of the snapdragon genes, so that the tomato plant would only turn its ripening fruits purple and not its leaves.

The desire to turn a tomato purple may appear quixotic at first but there is merit to this endeavor. Colors in produce indicate the presence of flavonoids, beneficial compounds known for their antioxidant activity. Specifically, deep red-blue-purple coloring indicates the presence of anthocyanin, a flavonoid widely found in fruits like blackberries, black currants and cranberries but not in significant quantities within regular tomatoes themselves. Seeing as tomatoes are one of the most commonly consumed types of produce, scientists sought to bring together the best of both worlds by infusing this flavonoid into tomatoes, which turns them purple in the process.

Anthocyanin to the rescue?

Anthocyanin and the berry fruits that contain it have received quite a bit of attention in the research world because of their ability to inhibit the growth of cancer cells. Berry juices containing anthocyanin have been shown to destroy stomach, prostate, intestine and beast cancer cells.

Human studies have been mixed however. Initial results from a study of ten high-risk pre-cancerous patients show dosing with berry compounds reduces oxidative stress. Another larger, controlled study had twenty women drinking cranberry juice but found little evidence of quantifiable benefits from drinking the juice over a two week period.

Still, scientists are excited about their purple tomatoes.

“This is one of the first examples of metabolic engineering that offers the potential to promote health through diet by reducing the impact of chronic disease and certainly the first example of a GMO with a trait that really offers a potential benefit for all consumers.” said Professor Cathie Martin of the John Innes Centre [https://www.jic.ac.uk/], who participated in the research.

“The next step will be to take the preclinical data forward to human studies with volunteers to see if we can promote health through dietary preventive medicine strategies.”

What does it all mean?

From a scientific standpoint, Professor Martin makes an excellent point; this is the first proactive use of genetic manipulation to improve the nutritional characteristics of a food. Up until now, most GMO ‘advancements‘ have been made in addressing the genetic weaknesses of large foodstuff monocrops, like soy and corn, that allow greater quantities of the crop to be grown. The team at the John Innes Centre has successfully genetically modified a major food product for the benefits of health, not crop yields. This is a welcome development in a world suffering from a modern malnutrition epidemic. 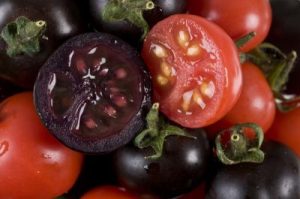 However, the scientific studies surrounding anthocyanin – the purple maker – do not give us the guidance we would hope for. If simply dosing with anthocyanins retarded cancer, we would be seeing those results come out in the trade journals. For now, we just haven’t seen those results – if anything we have seen the opposite.

Some of this can be explained by examining the nature in which nutrients actually become absorbed into the body. These processes appear to be incredibly complex but, generally speaking, we know the nutrients found in foods require other nutrients to be sufficiently assimilated. Studies bear out this idea, like findings that correlate a decrease in cancer with a diet heavy in antioxidant fruits and vegetables while juxtaposed against the fact supplementation with singular antioxidant vitamins seems to have no positive health effect. The basic idea is that nutrients require each other, in very specific amounts, to create the symphony of good health.

What will decide whether the purple tomatoes becomes a significant contribution to the world of health lies in how the discovery is handled from here. If these tomatoes are adequately and rigorously tested both in vitro (in the lab) and in vivo (in people) for safety, we could really have a development that significantly improves the well being of millions of people, especially those with a genetic predisposition to cancer. Any additional intake of beneficial flavonoids into the Western diet, currently riddled with excessive amounts of fat and sugar, would be welcome. 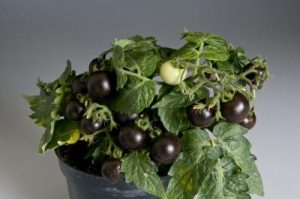 We wonder whether scientists are taking a very ‘Rube Goldberg-esque’ approach to a technically simple problem. Designing a fancy, purple tomato is definitely a good way to get more flavonoids into the Western diet but the inclusion of more blueberries and raspberries, which require no genetic modification, would accomplish the same thing. This is an awfully large mouse trap, so to speak.

Our other major concern is one of history. If we let the recent past be our guide for the future, the purple tomato could very easily become another weapon in the hands of agribusiness. For generations, farmers have conducted defacto genetic engineering by choosing to breed the most prolific plants on their farms but that world has long ceased. Genetic modification of crops by large corporations is the new norm and, unfortunately, GMO seeds carry with them an especially troubled past. Often, these modified seeds have been used as a bargaining tool against farmers, ironically enough.

The Monsanto company, who has conducted the lion’s share of the development behind the GMO revolution, understandably wants to collect on their sizable investment in the space. We take up no arms against that principle but the disgraceful tactics Monsanto has employed over the years creates great hesitation. Profiting from technological advancements is part of what makes capitalism work but extorting the world’s farmers via the food supply is simply not tolerable.

Instead, we would like to see the public/private partnership between the John Innes Centre and the UK’s Biotechnology and Biological Sciences Research Council continue into the future. We believe this model offers the most promise for the development of a better food supply. Open licensing of the purple tomatoes’ genetic code could be a welcome step instead of the now common draconian smoke and mirrors act that accompanies nearly every GMO product brought to market.

In short, the proof will be in the pudding. Which path the purple tomato takes will make all the difference. Good luck little guy; we fear it will be a rough road for you from that greenhouse to our plate.