The Social Side of Eating

Much of nutrition focuses on the individual. You are responsible for picking the right foods, eating healthy, exercising, and doing what’s best for your body. Nutrition consultations are one-on-one, focused on the single person’s dietary needs and deficiencies. And that’s great – if you’re single, have no friends, and live and work by yourself. But the truth is most of us are a part of a larger network of people, whether it be because we’re married, work in a large office, or have a tight-knit group of friends. Who we eat with, as it turns out, has a big impact on what we eat. To ignore this influence when thinking about diets and food is a recipe for disaster. 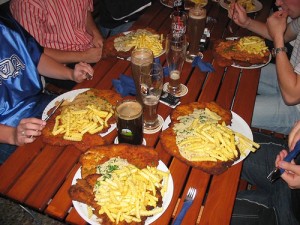 Men eating more while with their friends. (Thanks flickr user colros)

How who you eat with affects what you eat

The idea of eating as a social activity is nothing new. Who you eat with has always been important in the social lives of humans, whether it be who eats first at a ritualistic feast or who gets invited to the dinner parties thrown by presidents or diplomats. Heck, even what you eat has social implications – if you can afford to indulge on the finest filet mignon or beluga caviar. Food and social interaction are deeply entwined in the human psyche, a fact which we tend to ignore in our daily lives.

Of course, our bodies don’t ignore it. Without even realizing it we change how we eat based on the people around us. Women, for example, eat less calories when they’re eating with men than when they eat with women. Both men and women eat less in front of a stranger of the opposite sex, but women eat particularly less if the guy is attractive. In general, people eat about as much as they see other eating, and eat more when in larger groups of people or when we think other people have eaten more. Even more impressively, how much you like a food item can be influenced by seeing the like or dislike of that food by others.

But the changes aren’t limited to just who is around in terms of number and gender – their relationship to us has a big impact as well. Guys eat more around their guy friends than male strangers. In fact, men eat more around their guy friends than any other pairing of people. Couples and females around strangers eat much, much less. Married couples eat healthier than single people do, and in turn live longer lives and have reduced risks of diseases like diabetes and heart disease according to national health data like that provided by UK’s Office of National Statistics. In the UK, for example, the mortality rate for single men between 30 and 59 is 2.5 times higher than their married counterparts. Other research has found that married elderly couples are more likely to eat breakfast.

The Big Question: Why?

Why do we change what and how we eat around other people? There are a number of reasons. The first has to do with cultural attitudes towards eating. In general, people associate eating less with being feminine and more attractive. So, for women, eating less in front of people they want to impress makes sense. Similarly, men around their guy friends might want to seem more macho or masculine by consuming more. One study found that this effect is even more pronounced when participants are shown images of attractive members of their own gender first. Women are trying to conform to a societal expectation to be small and skinny, while men try to prove themselves by being bigger and better. 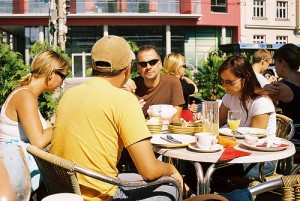 Men and women eating less than in front of their same-sex friends. (Thanks flickr user alex_kuruz)

But even still that only explains some of the effects. Why are married couples so much healthier than the rest of us, for example? You’d think that a single man or woman, in a constant effort to impress members of the opposite sex, would be in peak condition, while their married counterparts, having at least, in part, secured a mate, would begin to eat poorer. This is especially true when you factor in kids. After all, with kids come the tempting snacks that are left over from kid-oriented meals. And scientists have found that parents eat more than other married couples. But even still, in many developed nations like the UK, married women with children are the healthiest group of people, followed closely by married men. If they’re not trying to constantly impress others, why are they eating so well?

For one, you have to blame the women. Women eat less and healthier than men do on a day to day basis, period. For example, women eat more fruits and vegetables than men, a difference attributed to increased knowledge about nutrition by women. When men marry women, it’s like having a personal nutritionist there 24/7. This is shown by the fact that marriage, while beneficial to both partners, is far more beneficial to a man’s health than a woman’s. When men lose their partner, either due to divorce or death, their health plummets. Wives also take their husbands away from the constant influence of their male peers, who they tend to eat much poorer around. Part of this, of course, is society’s fault. Maintenance of a family’s nutrition and health are seen as a women’s role, whether women like it or not. Perhaps, as society changes and gender roles become more balanced, the marked increase in health for married men compared to married women will disappear. 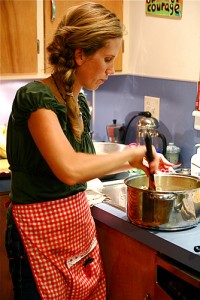 Wife keeping her and her husband healthy by cooking the right food at home. (Thanks flickr user stevendepolo)

Though, of course, it’s important to note that women get health benefits from marriage, too. It’s possible that, by getting married and having kids, women choose the role of a family’s nurturer and eat better for themselves and, in turn, force their families to do the same. But that’s not the whole story. One of the most likely reasons for healthier married women is simple – they’re happier. When we’re happier, we eat healthier, drink less, and exercise more. Of course, another big benefit for couples is shared eating. Couples are much less likely to eat out than single men and women. Mostly, this is attributed to motivation – single men and women simply have less motivation to cook when they’re cooking for one. Cooking at home leads to healthier meals (because you know what actually goes into it) as well as smaller portions. Basically, by getting married, women tend to end up doing those simple dietary changes that are so heavily recommended by nutritionists – eat the right amount of healthy food at home.

How Do You Use This Knowledge?

Well, for one, you can get married. I’m just kidding! The key is to act like you’re married, whether you are or not. For example, cook your own meals. Eat regular meals, as if you had to rely on feeding someone else. Or make yourself feed someone else – maybe instead of cooking for one you can arrange packed lunches with your friends, where each of you takes turns bringing in lunch for a small group at work. That way you’re not relying on take out or prepared meals, and you have the motivation to actually cook something. Or cook big meals and freeze them – it’s easier to convince ourselves to cook in big portions, and if you freeze it, it’ll last you as long as you need.

Whether single or married, be aware of what you order when you’re in a large group when you’re eating out, and pay attention to how much you eat at office parties or other buffet-style meals when you eat in. If possible, do your best to take a moment and really think about what you’re going to eat so that you’re not swept up in the social aspects of the meal. Is someone ordering appetizers? Maybe you should get a smaller meal, knowing that you’ll munch on the chips and salsa first. As hard as it may be, ignore your mom when she tells you what to eat at family gatherings and make decisions for yourself. When people think about what they’re eating, they tend to eat better – so don’t just mindlessly munch! After all, while you may be influenced by the world around you, you’re also able to rise above those influences and control your own behaviors.