When Cutting Calories Doesn’t Cut It

The most common advice as to how to lose weight given my doctors to people that are overweight or obese is to cut calories. Reduced caloric intake has been lined to all kinds of health benefits, from extended life span to reduced risk of heart disease. But the primary goal of people who slice their caloric budget is to lose weight. 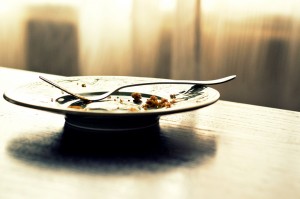 In principle, this makes perfect sense. Your body uses the calories you eat to fuel its metabolism. Eat less food, and the body must make up for the lack of fuel somehow, ideally, by beginning to digest stored fats that were deposited in specialized cells when the you were eating more food than your body needed.

But as anyone who has tried to diet knows, it never seems that simple. Even when you are as loyal to your diet as you can be, you never seem to lose the kind of weight you want. Now, new research out of the Oregon Health and Science University may explain the discrepancy between theory and reality. They found that, at least in some of our closest relatives, cutting calories isn’t enough because the body compensates for the reduced intake by lowering activity levels.

Because controlling diet in people is notoriously difficult, the OHSU research team used a primate model to determine how well reducing calorie intake in adults works as a weight loss strategy. They took 18 female macaques and fed them a high-fat diet for several years, allowing the monkeys to pack on the pounds. They then cut their dietary fat intake dramatically, leading to a 30% reduction in calories. They monitored the monkeys’ weight and activity levels over time to see if the change in diet caused the animals to lose weight.

Instead of losing weight, the calorie-restricted macaques got lazier. Indeed, despite cutting almost a third of the calories from their diet, the macaques didn’t lose any weight at all in the first month. When researchers cut their calorie intake even more, down another 30% for the second month, the same thing happened. There was a little weight loss during the extreme calorie cutting, but not much, and instead there was much less activity. Meanwhile, a control group that was forced to run on a treadmill for an hour every day lost plenty of weight, even though the treadmill had no effect when they were on the high-fat diet.

What It Means For Us

Everyone wants to believe that if they just cut back a little, they’ll lose weight. Yet time and time again we’re reminded that diets almost never work. Perhaps part of the problem is that while we focus on cutting things out, we forget that we need to keep up our body’s energy utilization for the lack of calories to have any effect. The body has many natural mechanisms to conserve energy during times of food shortage. Decreasing activity levels are likely just one way in which our bodies compensate for perceived starvation. While this was great for the chaotic and troubled paleolithic man, it gets in out way when we try to slim down in a fat-filled, food-plentiful modern society. So if you’re trying to lose weight, instead of just changing your diet, be sure to keep up an exercise regimen that will force you to keep active. You don’t have to work out four hours a day or anything – just do something that ensures that you use up some energy and don’t just sit around. That way your body feels the need to use your fat stores for fuel, and you see what you expect from being faithful to your diet.