When You Should Eat

More often than not, dieters focus exclusively on what’s going into their bodies. They cut out food groups, add food groups, count calories and create meal plans. But research has found out that while what you eat does matter, when you eat has a big impact, too. According to new research from Northwestern University published in the journal Obesity, eating at night can increase weight gain by more than 25%! 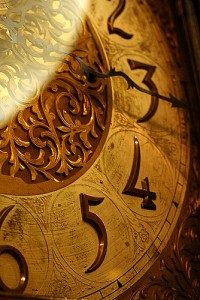 Watch the clock when you are eating, thanks Steven Depolo

Our bodies have an innate timing system called the “Circadian Rhythm” or “Circadian Clock.” Hormones and chemical releases tend to tell us when we’re supposed to wake up, when to sleep, and a variety of other day-to-day activities. Some of these can be altered with consistent changes to daily patterns – getting up a few hours earlier, for example, can affect when your body decides it’s time to get up. But others are dependent on external influences and are much harder to shift. It’s been suggested for a long time that our bodies internal clock has a big effect on our weight loss or gain.

Meals eaten in the morning, for example, have different hormonal effects than the same meals eaten in the afternoon. One of the major factors seems to be cortisol levels, which, after not eating all night long, are much lower in the AM.

When dieting, we’re often warned not to eat late at night. This conventional wisdom, however, has generally had little support scientifically. No studies have shown whether the daily effects we see are absolute or simply due to current patterns. In other words, if a person were to change when they normally eat, it’s possible that the effects we see from morning v. afternoon meals would change, too. Specifically, if one were to eat at night, it’s suggested that the increased cortisol levels would negate the effects seen by other meal-timing studies.

So where does the “don’t eat at night” wisdom come from? Well, mostly, scientists have shown that people tend to eat more when they snack later, thus increasing their overall calorie intake and subsequent weight gain.

But Northwestern University researchers started to think there was more to it. They noticed that late-night shift workers who end up regularly eating at odd hours of the day tended to weigh more than their daytime shift counterparts. Were they really just eating more than the daytime shifts, or did the timing of their meals have an effect on their weight?

Northwestern University researchers hypothesized that there was more going on. They wanted to know if our body’s daily rhythms have an impact on how food is processed. So, they designed a study with mice to determine if eating at night has an affect on weight gain.

Watch those midnight snacks, or fat mouse disease might strike.

To determine how our circadian clock affects weight gain, the researchers took mice and fed them a high fat diet. They split the mice into two groups, allowing both groups of mice to eat as much as they wanted for 12 hours, and recorded how much they ate and their activity levels.

The only difference between the groups was that one group was fed during the normal waking hours, the other, during the night. They gave each group the exact same food with the exact same nutritional values and fat content, to see if timing alone affected weight gain. After six weeks – plenty of time for their mice bodies to adjust to the patterns – the results were staggering.

Both groups ate the same amount of food and had the same levels of activity. And, because they had such a high-fat diet, both groups gained weight. Those fed during the day increased their body mass by an average of 20%. But the nighttime fed mice gained a lot more than that, increasing their body mass by an average of 48%. That’s 28% more weight gain just by eating at night instead of during the day!

The researchers are following up by looking into the molecular mechanisms behind this increased weight gain. Their hunch is that the few hormones that are on strict circadian clocks (ones that don’t change even when you stay up all night repeatedly, for example) might influence how fat is processed in the body.

Just like you have to think about your activity levels when working towards weight loss, you have to consider when you eat as much as what you eat. And not eating at night is just one facet of this: how many meals a day, what you eat at which meals, and when you eat those meals during the day also have impacts on the overall success of the diet. Cutting calories isn’t everything!