Many supplement pills or health foods claim to boost brain power – all you have to do is pay an arm and a leg for their product. The advertising divisions are counting on the fact that consumers don’t really know what’s in their foods or what compounds are the ones that boost their brains. And, since everyone wants a mental edge, whether it be for work or school, many people fall victim to clever marketing and outrageous ad claims. But, luckily, you read Nutrition Wonderland – so you know that you don’t have to pay some corporation for good nutrition. If you want some healthy brain-boosters, all you have to do is take a trip to the grocery store. 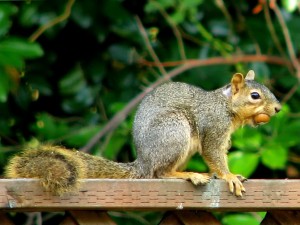 Many foods are packed with compounds that help boost memory, concentration, motor skills, and mental clarity. Some even have shown to help prevent brain degenerative diseases like Alzheimer’s. Most importantly, all these brain super-foods can be found at a supermarket – you just have to know what to look for! Here are some easy items from the nut family you can add to your diet to get the most out of your mental muscle without breaking the bank.

All kinds of nuts have been shown to be great brain boosters. The main reason nuts and seeds are so good for our minds is that they’re chock full of Vitamin E, particularly almonds and hazelnuts. “Vitamin E” is not actually one specific compound – it’s the collective name for a group of fat-soluble compounds with distinctive antioxidant activities. Antioxidants are the compounds which protect our bodies from damaging themselves, allowing cells to function better and stay healthier longer. It’s said that Vitamin E, compared with other antioxidants, are the ones which most readily enter cells, and thus are effective at low doses. 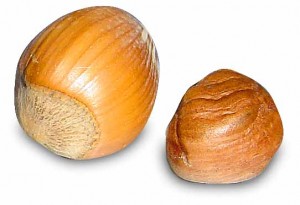 The Hazelnut – your source for Vitamin E

Vitamin E has been linked to all kinds of great protective effects in the brain, from preventing disease to improving brain power. One study, published in the New England Journal of Medicine, found that supplemental dietary vitamin E delayed the progression of the Alzheimer’s. Another study found that Vitamin E and C together protected older Japanese men from dementia and improved their overall cognitive function. Of course, nuts aren’t the only foods with Vitamin E. You’ll find quite a bit of it in:

Nuts also have more to offer than just Vitamin E. Walnuts, for example, have been found to be a great brain food, but they don’t have a whole lot of Vitamin E. Instead, they’re packed with Omega 3 fatty acids – the same compounds found in high concentrations in intelligence-boosting fish. Over 2,000 scientific studies  demonstrate the incredible range of problems associated with a lack of Omega 3s – of which walnuts and fish are pretty much our only common dietary sources – and even still scientists estimate that 60% of Americans have diets that are deficient in Omega 3 fatty acids, and about 20% of Americans so low on these key lipids that blood tests won’t even detect Omega 3s in their blood.

The brain is complicated – so check out how it works to understand why you need to feed it correctly:

You have to understand – the brain is 60% fat. You need fats to keep the brain functioning and working well, and not all fats are created equal. Fill yourself with junk food and your brain will consist of more junk fat. For the mind, the best are those Omega 3 fatty acids found in walnuts and fish. These fats end up in the nerve cell membranes and work to make them more fluid, which allows them to be more responsive to cellular signals and make them more efficient at sharing and receiving information. One study, published in the British Journal of Nutrition, found that a diet which includes 1 ounce of walnuts a day (7-9 of them) can improve balance, coordination and spatial memory – at least in rats.

Walnuts also contain phosphatidylcholines, a group of lipids which are major components of membranes and can be cut to give choline, a key part of the neurotransmitter acetylcholine, which helps speed up the signal transmission between brain cells, allowing your brain to process and store information much faster.

Here is a great little video to help show you whats going on in your brain (you want to help this electrical storm out!): 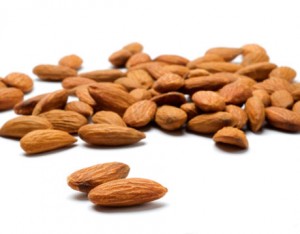 Almonds, part of the solution

Almonds contain phenylalanine, which unlike other compounds crosses the blood-brain barrier easily, and has been shown to alleviate Parkinson’s Disease and boost the neurotransmitters dopamine and adrenaline. Dopamine levels are important for good memory, attention, and problem solving skills, and adrenaline is linked to focus and attention as well as energy. Cashews have magnesium, which helps dilate the blood vessels in our bodies allowing more oxygenated blood to nourish our neurons. In general, just about every nut has a brain-boosting effect outside the generally high Vitamin E levels.

Keep in mind, though, that nuts, while chock full of goodies, are also high in calories – so don’t overdo them. Also, you can have too much of a good thing: some of the studies which looked at nut doses found that really high doses actually impaired the brain, whereas moderate doses improved it. So sticking with a couple ounces of nuts and seeds a day as a snack is probably better than replacing an entire meal with them.

This article is the first part of a two part series on Brain Food – you may find the next article on berries and greens helpful.