Does McDonalds Own Chipotle? – Mailbag

Hi – I was watching Nightline a couple weeks back and they had a special on Chipotle using free-range animals. Then I remembered that Chipotle is owned by McDonalds [America’s #1 buyer of factory farm beef -ed]. Is this true?

This is an excellent question we have also heard many times. After some research, the short answer is, no, Chipotle is not owned by McDonalds as of 2009 but it once was. The story is quite complicated actually.

How deep does the love go?

Chipotle was founded in 1993 by Steve Ells in Denver, Colorado, funded by an $85,000 loan from his dad, according to an excellent article by the Rocky Mountain News, Denver’s now defunct paper. The restaurant was based upon Ells time in San Francisco where he studied the burrito stands in the city’s Mission district. His instincts were vindicated as the restaurant was an immediate success. Ells managed to open a chain of five stores around Denver by 1998.

After this initial success, McDonalds did enter the picture, purely as an investment partner in 1998, technically making Chipotle a subsidiary of McDonalds. That same article from the Rocky Mountain News mentions, very briefly, that Ells family connections to McDonalds helped pave the road for Chipotle’s massive expansion. We did not independently verify this fact, but it was published in a major American newspaper, giving it substantial weight in our minds.

From Investor to Owner

With McDonalds onboard, Chipotle started to build out beyond their Denver market – into Kansas City, Ohio and Minneapolis. That success that would lead McDonalds to become the majority owner of the firm in 2001, making Chipotle fully-owned subsidiary of McDonalds. This is when Chipotle ascended into a household name across the United States. From 2001 to 2006, Chipotle went from under 100 stores to 466 – expanding into more than 30 states [1].

It was then in January 2006 that McDonalds said goodbye to Chipotle, spinning off the company in an IPO on the NYSE, saying they wanted to concentrate on their core business.

Technically though, that was not the end. McDonalds continued to hold a large amount of class B shares of Chipotle for another 6 months, and these class B shares contained over 80% of the voting rights to the company [2]. McDonalds then authorized the final divestment deal in October of 2006 whereby their own shareholders could exchange McDonalds stock for the remaining class B voting shares of Chipotle. According to SEC documents, this was done for tax purposes [2].

So, since October 2006, Chipotle has not been owned by McDonalds but much of the company’s DNA and supply chain management is likely taken directly from McDonalds. Chipotle now trades as an independent company on the NYSE under the call sign, CMG [3].

Here is the Nightline story and video James was referencing: 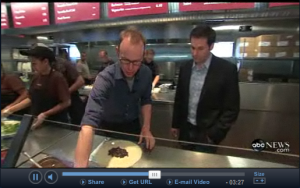 The video highlights Chipotle’s commitment to buying from pasture-raised hog rearing operations. Many of these operations are small in nature, so there is an implicit commitment to sustainable farming practices. We cannot be sure of exactly how local or regional Chipotle’s supply chain (those are trade secrets), but in the fast food arena, they are the leader in this space. Chipotle was the first restaurant to remove rBGH for all their milk products, buys from family farms and makes a real, financial commitment to sustainable meat.

The real conundrum James is implying with this question of Chipotle’s ownership is how could McDonalds, known for poor food quality and nutrition, simultaneously invest in a company with such divergent values.

McDonalds is a business and will do whatever it takes to make money. Chipotle hit a nerve with the public and McDonalds likely did extremely well with their investment.

For their part, McDonalds does keep a “Values in Practice” section on the corporate responsibility portion of their website. It mentions some laudable things – namely that:

In 2007, 91% of our fish was sourced from fisheries without any unsatisfactory sustainability ratings.

But, as is the case with most ingredient labels you see in the store, what isn’t said is usually more important than what is. McDonalds is well known as the leading buyer of meat from factory farming operations. And while McDonalds does certify that their operations are humane, whatever guidelines they are using as not publicly available so they cannot be verified.

Their operations are so large that even if they made a small commitment to sustainable farming practices, massive changes would occur throughout the supply chain – effecting what’s in the grocery store for everyone. Hopefully, that day is near.

In the mean time, you can enjoy either Chipotle or McDonalds foods knowing they are two, separate corporate entities.

Full Disclosure – This author owns no stake in either one of these companies.

A late edition here, this is the nutrition information for the Chipotle menu.