Nutrition Wonderland is now up in Monterey, CA as part of our Tour of America and today we are attending the first of the USDA’s hearings on nationally adopting the Leafy Greens Marketing Agreement (LGMA). This new proposal, dubbed the NLGMA, would extend the existing agreement that covers California and Arizona across the entire nation – even extending into Canadian and Mexican imports. 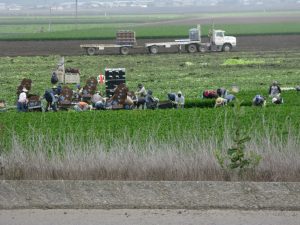 While it may seem a bit much to cover such a specific agreement, it is important to note that in this case, the USDA is literally borrowing a regulatory framework from industry – which is unusual. In fact industry, in this case Western Growers, is asking the USDA to adopt this policy at a national level. And remember, the LGMA only exists because of the massive consumer boycott that followed the 2006 e.coli outbreak in spinach. Consequently, it has been highly contentious with numerous public interest groups speaking out against the measure. We wanted to take a closer look at what is really being talked about here and how it would impact the small farmers it is largely targeting.

The first person we saw at the USDA hearing was Laura Mills, representative from Metz Fresh, a major handler/shipper for 10 large leafy greens growers. Most of her testimony was based around the idea of industry specific Good Agricultural Practices (GAPs). She talked about the lengths LGMA signatories would go in order to meet – and often exceed – their own guidelines. Remember, LGMA was set up by the growers themselves, large ones at least, so the 2006 e.coli incident would never happen again.

Most of this behavior was fueled by ever pickier buyers says Mills. Don’t think of buyers as consumers, rather buyers refers to actors in the wholesale market – say Whole Foods or Safeway buying from a farm. These same buyers now look to growers who can exceed the LGMA standards by meeting supermetrics, as they were coined throughout the debate. Exceeding those LGMA standards sometimes comes with some severe environmental consequences, a topic we will cover in detail tomorrow but, industry reminds us, the result of this extra work is a safer food supply.

The consumers dictate the market and the buyers relay those signals upstream to the growers, says Mills. Safer food is the message being sent up the supply chain and LGMA is meeting those expectations. The question then becomes – just how safe do we want our food?

One of the best counterpoints of the day was a gentleman named David Runsten, director of the non-profit Community Alliance for Family Farmers (CAFF). This group of both large and small growers said they stand against the NLGMA. Runsten contends some very large leafy greens growers are also members in CAFF but we did not independently verify that. His general idea was completely the opposite of Mills, arguing against different standards for different crops. Small growers may have 1/2 acre plots of up to 100 different types of produce – especially for farmers targeting minority communities, Runsten added. 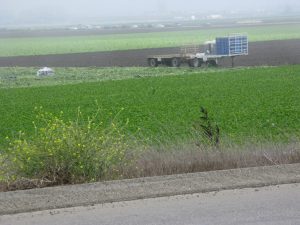 Case in point, we met the Yang Farm at the Silverlake Farmer’s Market in Los Angeles earlier this week. They had a host of crops catering to an asian tongue, like bitter mellon, chinese eggplant and asian pears. If there were an NLGMA for a variety of different crops, farms like Yang’s could be put into financial jeopardy – or more likely, they would simply stop growing the more regulatory onerous ones. When you see the diversity of crops local growers showcase at farmer’s markets, it gives Runsten’s argument significant weight in our minds.

Runsten’s continued in some other compelling ways. He mentioned the idea of leafy greens itself is a marketing term, a point lost on many in audience it seemed. This gets more contentious when you consider where to place truly leafy greens like cabbage, collard and mustard greens. As of now, they are outside the LGMA but still leafy and green – just not inside the industry fresh cut green packs we see in the stores, so they remain outside of the regulatory framework.

Regulation is not the only path large growers can take to enhance food safety. Annika Forrester, the Food Safety and Grower Communications Specialist for the California Strawberry Commission, spoke with Nutrition Wonderland last week about how she helped develop a major new program to educate migrant farm workers about proper safety and sanitation in the fields.

The Commission became more interested in protecting its industry after a hepatitis outbreak in Guatemalan strawberries decimated the market for strawberries in America during the late 1990s, much the same way greens growers reacted. Couple the loss with the fact strawberries are field packed – that is the field workers literally package the berries you would find in your supermarket – this crop was ready for some food safety attention.

Forrester helped create an educational food safety flip chart which acts as a graphical guide, engineered to overcome language barriers common among migrant farm workers. Forrester mentioned specifically that migrant worker managers, often Mexican, have problems communicating with their employees, now coming from deeper in Mexico – regions like Chiapas and Oaxaca that are traditionally Mayan, where Spanish itself is a second language.

The California Strawberry Commission holds training sessions around California, educating the managerial work force directly, so they can train their farms hand in better sanitation practices. The program has been implemented in early 2009 and so far, over 500 managers have been trained – using the flip chart to educate another 35,000 field workers by Forrester’s estimates.

Is It Really Large Versus Small?

Large organizations, as a whole, do not see food safety as an unnecessary burden. Both the leafy greens growers and strawberry growers are taking steps, albeit very different ones. One point is universal though: everyone is eager to have a more streamlined regulatory framework. We heard from Drew McDonald of Taylor Farms, the largest processor of leafy greens at the USDA hearing, that lacking a coherent food safety agreement was a key reason the LGMA was created in the first place.

In the absence of such an overarching food safety agreement, self regulation becomes a marketing tool. Think of the way Volvo established itself as a car brand: safety IS a marketable aspect of all types of products. With leafy greens, large growers can say they have a procedure where smaller ones cannot and use that to raise prices. The market for local foods is now so strong, smaller farms can differentiate themselves in the market in other ways outside of safety without this agreement – like sustainability or biodiversity for example. Smart industry here would see LGMA as a marketing weapon they can use to establish a competing cache to the local scene.

Instead, what we saw here is that opinions on moving towards a national LGMA, an NLGMA, broke down into familiar categories. Large packers and handlers were strongly supportive of expanding the existing agreement – largely because they have nothing to lose. According to testimony at the USDA’s Monterey hearing, 90% of all leafy greens are currently covered under the agreement already – so applying that protocol nationally costs nothing to large growers/handlers because they are already doing it. Smaller, local farms that have not implemented the extra safety protocol would face substantial costs, estimated at between $25-50/acre (figure given during hearings).

But the real question here is why apply bother with all of this? Local, small leafy greens operations have not had any reason to implement anything like this because there has never been a large scale outbreak from those operations. Despite being asked by the USDA, no grower or packer could cite an outbreak having come from a farmer’s market. All of the contamination in leafy greens has come large scale producers – think back to the bagged spinach. It was not an isolated incident either.

This all makes some sense if you think about it. Small growers do not have large distribution networks, so even if there was a localized outbreak it would stay localized. In that sense, the CAFF opinion makes the most sense – extend the LGMA solely to fresh cut products and leave the rest out. That view ignores the contentious small/large farm dichotomy and instead focuses extra safety measures on where the problem has been – with distributor fresh cut product.

We will have to see how the situation develops, as there are 7-8 more of these events around the country. Simultaneously, the major food safety legislation before the Congress has now moved over to the senate, changing names from HR 2479 to S 510. As all of this advances, we will continue to look deeply into the issues for you.

This is coverage for Nutrition Wonderland’s Tour of America, Day 3.