he early part of 2009 has witnessed one of the largest food contamination cases in US history.  The Peanut Corporation of America had a salmonella outbreak in one of their factories, contaminating the majority of peanut-butter containing products in the United States.  Unfortunately, this outbreak is not an isolated incident across the industry.

E.coli O157:H7, Listeria, Staph and Campylocbacter cause millions of bacterial infections every year.  The prevalence of these pathogens relates directly to how food arrives into your home today – a process that has radically changed over the last 20 years.   Here, we review the recent history of food borne illnesses and how they relate to the consolidation of the food industry.

Contaminated foods are far more common than you probably think.  Estimates suggest as many as 1 in 4 Americans, about 75 million people, suffer from food borne illness once every year while another 350,000 less fortunate people are hospitalized and 5,000 die.  People typically associate food contamination with meat – and for good reason.  The frantic hand-washing after handling most meat products strikes some as reactionary but it makes more sense when you see the numbers. 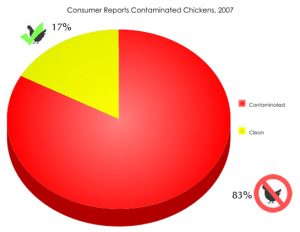 Consumer Reports ran a large study, testing 525 raw chickens in early 2007 and found a stunning 83% of all chickens were infected with salmonella or campylobacter bacteria.  Even more alarming, the majority of both bacteria’s tested were resistant to one or more antibiotics – largely resulting from the factory farm practice of giving their birds a constant, low level of antibiotics to retard hunger. [1]

All this is made worse by the dramatic consolidation of poultry slaughterhouses in the last 20 years, pushing ever greater numbers of chickens into tight spaces – the ideal environment for disease.  We could spend all day making the connection between factory farming and pathogens in food but that’s for another article.  The problem of food contamination goes way beyond meat products – they are only part of this story.  Before, we really get going, here is a primer video with the food safety czar Dr. Marion Nestle:

The most recent fiasco with peanut butter better explains many of the other issues involved.

Peanut Butter Under the Microscope

The speed with which the peanut butter fiasco unfolded speaks volumes as to what we are up against with the way our food system is put together and ensuring its safety.  On January 16th 2009, Kellogg’s recalled some of their Austin brand peanut butter sandwich crackers at the request of the government.  Within a week, 130 more products from all sorts of manufacturers had been recalled.  By the end of the month, 19,000 people in 43 states had been sickened and 8 had died from complications. 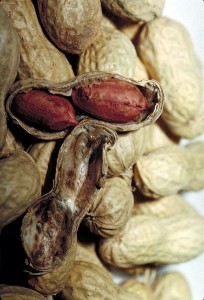 No bacteria in the shell

With a little investigation, the FDA and CDC found the entire outbreak could be traced to one plant in Georgia owned by the Peanut Corporation of America.  It may be hard to imagine that one single plant could contaminate a good majority of the entire nation’s supply of peanut butter in under a month but that seems to be what happened here.

To better understand how this could happen, the Times ran a great piece last month that starts to scratch the surface into the realities of the modern food system.  This is an excerpt from that piece that talks about inspections briefly but you will get the idea (emphasis mine):

“Plant employees said they typically had advance knowledge of state inspections and that last month, when they were tipped off that federal investigators were coming, the employees were told not to answer questions. Where the state had found no major problems, the federal team found many, like the leaky roof, and swab tests showed salmonella living on the plant floors. Plant managers had not decontaminated the peanut butter processing line after detecting salmonella, the federal report shows.

In examining Peanut Corporation of America’s records, federal investigators discovered that company tests had found salmonella 12 times since 2007. The inspectors said they got the records by invoking a bioterrorism law.”

Conflicting standards, a lack of funds, lax oversight and carelessness were all apart of this salmonella epidemic.  The Peanut Corporation of America may be the poster child for all of this but similar practices surely go on elsewhere due to the exact same circumstances that created this situation.   The reality is that it is very hard for any of us – including the safety regulators in charge of this operation – to know where the next firestorm will erupt.   Looking back shows us an almost identical set of circumstances that led to the last major outbreak prior to peanut butter – spinach.

Spinach Is Food Safety in a Nutshell

The e.coli O157:H7 outbreak in pre-washed spinach back in late 2006 was the last poster child for food safety reform.  The incident was widely covered in the media, excellent news pieces were authored about the problems – especially the eerily prophetic article published in the Washington Post, whose last line concluded “Unless something changes, we will have another outbreak.”

Tainted spinach fully captured the national spotlight when the CDC first made public the problem.  From their first bulletin (emphasis mine):

What’s important to note here is that by the time the first bulletin was issued, we were already dealing with contamination from coast to coast.  Essentially, the problem was nationwide before anyone even started to do anything about it.

A quick response by government agencies mitigated the damage but still almost 200 people feel ill and 3 died as a result of the outbreak according to the CDC.  Follow up reports on the incident get us even closer to understanding just how intertwined our food system is now.

The CDC worked with local California officials and conducted their own investigation into the exact source of the contamination.  Their findings suggested a nearby cattle farm who leased part of their land out to a spinach farm had runoff that was contaminated with the same genetic strain of e.coli that sickened large parts of the country.  Also suggested was that maybe a single wild pig may have run through the cattle manure and then the spinach. 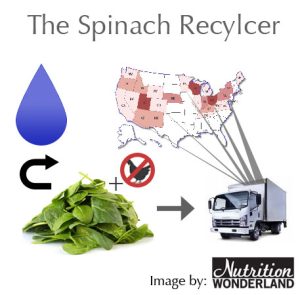 How could a single pig contaminate the entire nation’s spinach crop?  Surprisingly, it was quite easy.  Prepared spinach is ‘washed’ in water that gets reused over and over and over again.  It is assumed that the equipment and water are sterile but if one pathogen gets in, it easily spreads through the entire system.  After the spinach was bagged and trucked away, you can easily see how just one little pig sickened 200 people from coast to coast.

Food safety issues are more important now because the concentration of food production in the United States has increased substantially over the past 20 years.  The USDA published an insightful look at the US food production landscape back in May 2007 – and its results highlight just how concentrated most food related activities are today.

The report mostly focused on consolidation in food retailers – like the move from traditional supermarkets into warehousers like Sam’s Club – but it also found that food production and distribution  consolidated at a remarkable clip. 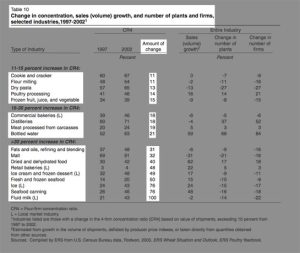 How food production has concentrated, USDA

Just in the period from 1997-2002, nearly every major food industry saw its four largest firms grow far larger.  Cookie makers, water distributors, seafood purveyors and milk producers saw their rates of consolidation climb anywhere from 10-100%.  Additional consolidation was seen in both the cattle and hog industries mentioned further down in the report.   In short, agribusiness is slowly becoming the de facto method of food production – and that means new controls are urgently needed.

Tying the Pieces Together

With dramatic uptakes in food industry consolidation, more and more of our food is coming from fewer and fewer places.  As we saw with both the peanut butter and spinach incidents, just one plant or one field can now contaminate the entire country in mere days.  Consequently, food safety becomes a bigger issue because there is a greater likelihood for contamination at every step.  Higher density farms, big processing plants and warehouse food retailers put massive amounts of ingredients together in ways whose ramifications we are only beginning to comprehend.

While smaller food brands, organics and farmer’s markets have grown at a strong clip, they are nowhere near offsetting the dramatic consolidation going on inside the agribusiness industry.  Stronger food safety measures, like the agreement the California Leafy Green growers instituted after the spinach ordeal, need to be put into place everywhere.  It should not take outbreaks in each food group for proper food safety measures to become the norm, but, without an overarching national food safety framework, massive liability has been the only successful tool in motivating agribusiness to secure the food supply.  Here’s hoping things are a bit different this time around.

NOTE: This article is the 1st part of a series about Food Safety in the United States. You may want to read the first part to better understand this article: