What if this latest peanut-salmonella outbreak in 2009 was completely preventable?  What if the procedures to prevent it were already in place?  Even worse, what if we didn’t even have a food safety system at all?

NOTE: This article is the 2nd part of a series about Food Safety in the United States. You may want to read the first part to better understand this article:

, you will see the world of irony and contradiction finds a comfortable home in food safety.  Or should we say, a lack of food safety.  For it becomes painfully obvious in Nestle’s work that, in fact, we do not have a food safety system in the United States and a wide array of interests are actively working to keep it that way.

Going Down to Get Up

But before Nestle’s takes us down that dark road, we are introduced to this dysfunctional world very quickly with the story of how Starlink genetically modified corn made its appearance throughout the food supply in countries with bans on GMO crops. 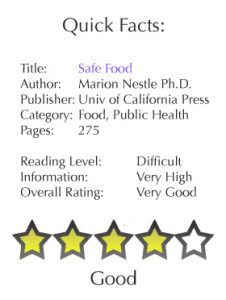 Quick Facts about this Title

Her treatment of the subject acts as an interesting twist on the typical introductions you generally see with non-fiction books.  We meet all the players, agencies and of course trickery in a haphazard fashion, instead of having it all methodically laid out.  The method is good – because if you are thirsty for facts, it prepares you for the coming Thanksgiving-like feast.  An avalanche of professional observations and research accompanies every point in this book.  For better or worse.

This style immediately establishes credibility and you will not find yourself asking whether or not the author is qualified to speak on the subject.  With a Ph.D. in molecular biology form UC Berkeley, a spot on the FDA’s Food Advisory Committee and Science Board and the USDA/DHHS Dietary Guidelines Advisory Committee, Marion Nestle does not really need a formal introduction to remind the reader she knows what’s going on – her prose does the job for her.

And it’s Nestle prose that sets up an interesting dichotomy around which the entire book spins.  She breaks the world of food safety into two what we would call observational positions:

As she explains throughout the later parts of the book, parties involved with actually making food safe tend to view the situation in a purely scientific sense – ie, the benefits of GMO far outweigh the risks – whereas consumers in the general public use value based judgements – ie, the fear of what GMO could be outweigh the benefits.

One of her central tenets is that the food makers need to satisfy the public’s value based concerns with the same perniciousness they purportedly apply to the science side of the equation – if we want to feel as if we have a safe food supply.  She claims this would go a long way to assuaging many people’s fears – an slightly provocative argument that would be a radical departure from how risks are currently evaluated.

After the three – yes three – introductions, we get that the book contains two prominent sections and smaller rejoinder about pathogens, GMO crops and food terrorism, respectively.  But before you think she adopts such a staid format to the detriment of the book, keep in mind how explosive and controversial the subject matter she is dealing with really is.  Billions of dollars are the scale agribusiness operates on and Nestle handles each topic with the proper respect.

After you find Nestle’s rhythm – which admittedly is not the easiest thing to do – the structure of the book fades away and you won’t find yourself burdened by it.  Other heavy lifting, however, is mandatory.

The book’s first section rips right into the meat of the issue, literally.  We get a first-hand account of the history of efforts and interventions that have been tried to implement a known protocol for ‘pathogen reduction’ called HAACP.  You’ll get a real sense of how much resistance there is on the part of industry to implementing these new controls.  Particularly disheartening was the section dealing with the government’s efforts to test ground beef for e.coli immediately before the Jack-in-the-Box outbreak of the early 90s.  From Page 77:

“On October 14, the day before the rule for ground meat was to take effect, the federal court in Austin, Texas, issued an injunction that blocked the labeling plan, saying that the Jack in the Box outbreak was insufficient to justify ‘any departure from the normal rule-making procedures.’  Industry groups hailed the injunction as ‘a victory of fairness over bureaucracy.’  That very week, however, three children in Texas died from eating ground meat contaminated with E. coli O157:H7…”

Similar tales of false starts and questionable means plague the history of food safety and Nestle pulls the curtains back in a fashion that is even and balanced.  You get the sense throughout her work that she, as an educator and public health advocate, is indeed enraged – even disgusted with the ways in which the system works but she never belies herself into a sycophant-like rage.  Instead, Nestle beautifully walks the tight-rope, delivering an objective review of the facts – a rare event in the charged world of food.

GMO as Savior or Satan?

Nowhere is this sensibility more pronounced than in the second part of her book, where she covers GMO crops.  Nestle gives her audience a good background on the issue and again dives into the core of the issue.  This time she focuses on the disconnect between researchers who better understand the mechanics of biotech foods and the consumers – reintroducing her dichotomy of science and value based arguments.  Particularly good is her chapter covering the ‘Politics of Consumer Concern’ – where she feels more comfortable in giving her opinion on the issues.  From Page 225:

“What seems more surprising [about the food industry] is how much the industry’s unyielding opposition to labeling damages its own cause.  If public trust is the key to successful marketing, biotechnology companies should freely disclose their methods, economic goals, and products.”

While she does give opinion, her treatment of the subject is really great because it, again, is able to show an objective view of the facts.  Sure, Nestle peppers her texts with her observations and opinions but she gives a fair shake to an industry she is usually in direct opposition to.

The conclusion of the text is an applied section about how the politics of food safety play into bio-terrorism.  The section has a real strapped-on type feeling, especially considering how closely this book was published to the 9/11 attacks on the World Trade Center, mere blocks from her NYU teaching post.  Still, the section comes off as half-baked, possibly a move suggested by publishers to include a terrorism-related topic to move a few more copies in the wake of 9/11.

Take the Good with the Bad

Nestle covers all subjects thoroughly, at times too thoroughly.  Often complex analysis of super specific issues creates a significant hurdle to understanding the issues for most people outside of the world of nutrition and health.  You are constantly reminded as a reader that Ms. Nestle is a first and foremost an academic.  Her brilliance is frequently on display but so are her verbose explanations.

It’s not that any concept she includes is particularly challenging in and of itself but taken together with the enormity of her topics, the political nature of the issue and the alphabet soup of acronyms you’ll find, Safe Food makes for a challenging read.  Observe a paragraph here where Nestle tries to explain the difficulties in determining food allergies (from page 173):

“The widespread use of soy proteins – transgenic or not – in foods such as infant formulas, meat extenders, baked goods, and dairy replacements might be expected to increase the prevalence of soy allergies, but the increase would be difficult to detect unless it affected large numbers of people.  Worse, because methods to diagnose food allergies are unavailable or imprecise, the allergenic potential of most genetically modified foods is uncertain, unpredictable, and not easily tested.”

Any reader of Nestle’s previous books would quickly recognize her academic style – and have formed their own opinion no doubt – but new readers should be warned.  Nestle expects her audience to come to this book with a significant background on the topic.  If upon hearing ‘GMO’ you are reminded of failed automakers or little green men from Mars, you might want to look elsewhere for a book.

But also realize this book’s high barrier of entry is also what makes it so good.  The more you read it, the more you know you are dealing with one of, if not THE, authority on the subject.  Yes, the prose bends towards the tone of an academic journal at times but if you want to understand the world of food safety, this is the book.

The exceptional insight into every dimension of this crisis, the balanced view from both sides of each issue and her ability to educate – even entertain – at times, makes this a great read for anybody with a background in health or food.  Therefore, we highly recommend Safe Food as it provides both acumen into the most pressing issues related to food safety as well as a detailed context for understanding the issues (purchase this work on Amazon