As I’ve been writing the “Understanding Our Bodies: The Physiology of Nutrition” series, I’ve tried to explain how the various chemical systems in our bodies relate to how and what we eat. For example, two of the biggest hormones that affect our eating habits – Leptin, the fullness hormone, and Dopamine, the brain’s reward hormone – seem to have very different and unrelated effects on our bodies. But every day science is discovering just how interwoven and related our bodies different systems are.

Just this week, for example, after explaining everything I could find about how dopamine relates to eating, scientists from the University of Michigan have discovered a new way that leptin regulates dopamine levels. The study, published in the journal Cell Metabolism, reveals for the first time that the brain’s lateral hypothalamic area (LHA) has neurons which receive signals from leptin and in turn directly feed into the central dopamine system in another area of the brain, the ventral tegmental area (VTA). Because of this, the amount of fat in our bodies (and everything I talked about in the Leptin article) has a direct influence on the amount of dopamine circulating in our brains.

What did the researchers do? 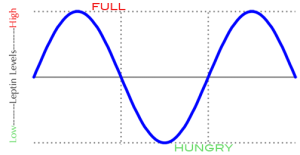 Most studies that look at leptin focus on one area of the brain: the arcuate nucleus. This is the area that is largely affected by leptin levels and the subsequent effect on appetite. Remember, when leptin levels are relatively high, we aren’t hungry, and when they drop, we want to eat. But this area of the brain isn’t the only one with leptin-responsive neurons, called “LepRb” neurons.

The researchers found that the lateral hypothalamic area (LHA) also contains these LepRb neurons. Other studies have found that a related area, the ventral tegmental area (VTA) also contained a few of these LepRb neurons, and that leptin stimulation there had an effect on dopamine. Other researchers have found that, in general, the LHA has a strong affect on the VTA. But no one had ever looked at how the LHA related to leptin or the VTA’s dopamine. So, the scientists decided to probe a little deeper.

They took rats and injected leptin directly into the LHA portion of their brains. What they found was that these rats ate less and lost weight. In turn, by sampling brain tissue from the rats, they found that leptin in the LHA caused a 40% increase in dopamine in the VTA as well as a 2.5-fold increase in gene transcription related to dopamine. Simply put, leptin in this area of the brain caused a strong increase in dopamine that was previously unknown to science.

What does this mean?

The fact that leptin has a direct affect on dopamine levels means that its controlling more that just our appetites in terms of the food we feel a need to eat, it’s controlling what we want to eat. It’s affecting both our needs and our desires. This increase in brain dopamine likely influences our abilities to avoid tempting foods like sugars and carbs when our bodies don’t actually need them. So if you’re leptin-deficient because of crash dieting or leptin-insensitive because of obesity, you likely feel stronger and harder to resist urges for these foods, making staying healthy or losing weight even more difficult. 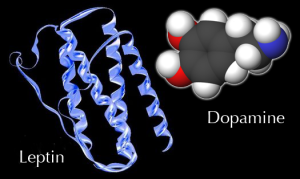 It makes sense that leptin would have an effect on the brain’s reward systems. After all, we know that a decrease in dopamine can lead to cravings for food even though our bodies doesn’t need it. If a hormone is to properly control appetite, it would have to have some affect on the dopamine system to prevent unnecessary overeating. Way back when, when humans were evolving, overeating could be costly. When food is scarce, using up what little food is available could mean starvation. So there would be a strong selective pressure to prevent the body from eating too much when it doesn’t need it nutritionally.

The good news is, these results suggest that our bodies do some of the hard work for us. If we can get our bodies to a healthy weight with good nutrition, the natural leptin levels will help control our desires for bad foods, making it easier to stick to the good we’ve done. On the downside, it means that upsets to our leptin system like crash dieting or obesity have an even more marked impact because they throw off our dopamine levels, too. The scientists in this study note that exactly what happens to dopamine when the leptin system is off is a key area of study for the future.

As always, this study is yet another reminder that there is a cost to eating poorly and a much bigger benefit to eating healthy and being fit. It’s not just about weight. Dopamine controls our overall needs and desires, feelings of self gratification, and overall happiness. Eating right is about not only how good we look but how good we feel. You’d be surprised at how strong an effect nutrition has on our emotions.