Understanding our Bodies: Dopamine and Its Rewards

As much as we’d like to deny it, there’s a lot more involved in our decision making when it comes to food than just the advice of our inner and outer nutritionists. For the most part, we know that we should be eating. Yet time and time again when a friend asks us if we want to go grab a Big Mac or when we’re walking down the aisles in the grocery store, we neglect our own advice. Why? Why are those foods that are so terrible for us so darned appealing?

The Deal with Dopamine 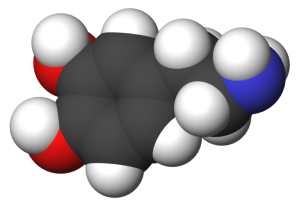 Dopamine is one of our body’s neurotransmitters. It’s one of the most common biochemical compounds in animals, and is found in everything from invertebrates to us. It has a variety of functions, not all of which are fully understood. We do know that it is key in behavior, cognition, motivation and reward. In other words, it helps tell your body when you’ve done something good, and promotes our brains to remember what we did that was good and repeat to get the reward again.

When we receive a reward of any kind, dopamine is released in our brains. Over time, this stimulus and release of dopamine can lead to learning. Researchers have recently found that how quickly and permanently we learn things relates directly to how much dopamine we have available in our brains. As we get rewarded over and over again for something, we learn that we should keep doing whatever that is very deeply, and it’s hard to unlearn those kinds of behaviors.

Logically, it’s one of the neurotransmitters targeted for treatment of addictions. Whether chemical or psychological, addictions are made when our brain gets a dopamine boost over and over from a behavior. We learn to not only associate that behavior with the happy reward, but to crave to do that behavior when the rewards aren’t around. Even when there are better, easier, and less destructive ways to make ourselves feel better, our brains are trained to do that one action that it is used to doing – a drug, a drink, sex, whatever – to feel that satisfaction again.

One of the reasons cocaine is so addictive, for example, is that it prevents the brain from removing dopamine from the space between neurons as quickly, causing reward circuits to fire for longer and more intensely than they normally would. Thus anything done on cocaine that causes a dopamine release feels even better – like if someone hands you a dollar, you feel like you’ve been given a twenty instead. When users stop, suddenly life itself just seems less rewarding, and their bodies crave that happier, more-fulfilled state of mind. 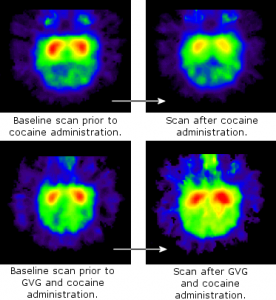 Effects of cocaine on dopamine activity in the brain

The important thing to note is that dopmaine doesn’t change the pleasure (or lack thereof) involved with a behavior, just how much we want to do it. For example, rats who have been artificially depleted of dopamine simply won’t eat, but when force fed, they make facial expressions which suggest they actually enjoy it. Similarly, increasing dopamine makes rats crave sweet rewards more, but doesnt change how much they actually like them. Even if you don’t like something at all you can end up wanting to do it if it causes some kind of consistent dopamine release.

This is important to our diets because, for one, we get little dopamine rewards when we eat. The more spaced out your meals are, the more time your body spends with lowered dopamine levels. Thus eating smaller meals more frequently actually keeps dopamine levels higher. People who have genetically low levels of dopamine have been shown to be more likely to overeat, most likely because they aren’t getting enough of a dopmaine response. Similarly, the more dopamine receptors a person has, the better control they have of their diet and what they eat. Unfortunately, genetics can have a lot to do with it, so for some people, sweet rewards are harder to fight.

But it gets worse. The exact conditions when we receive our “reward” stimulus are imprinted on our brains, too. Research has shown that rats that are given chocolate in a given situation learn to expect it, and the same situation triggers reward networks in the brain even without the chocolate being present. So once our brains connect bad food with a particular mood, feeling or state of mind, it’s hard to reverse it. For example, if eating dinner is a time when family gets together, people feel warm and friendly, and are bonding, then when later in life you’re feeling lonely, you might try eating to make yourself feel better. This is especially true for people who are conditioned at a young age to associate sweets with some kind of good deed – get an A, get to eat a sweet otherwise forbidden. Later, when they want the same feeling of accomplishment, they often turn to the food stimulus to create the feeling. It’s exactly why we all know what “comfort food” is. 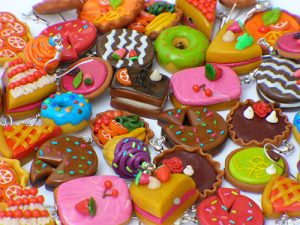 The temptations of your sweet tooth. (thanks jujuly25)

And, of course, then there’s the worst part: unhealthy foods actually trigger the brain’s reward systems better than healthy ones. Sugar and sweets can trigger the brains reward systems completely separate of their tastes. In our bodies, it appears, dopamine release is calorie-dependent, thus the more you eat in a sitting, the more dopamine is released, and the more rewarding the meal is. Of course, very dense calorie-packed junk foods just lying around waiting to trigger your brain’s reward system make it that much harder to eat healthy. And, of course, over time if you eat a lot of sugary, high-calorie foods, your brain’s dopamine system gets desensitized, making it harder and harder to get the same reward from those foods, meaning you eat more and more of them.

But despite the bad news, there is a lot of good that can come from understanding your body’s reward system and how it relates to diet. Instead of being defeated by your brain, you can actually train it.

There are things you can do to train your body and brain to eat healthier. For one, do your damnedest to avoid those calorie-packed, super sugary, and generally bad foods. If you never eat them, your brain never gets the chance to associate them with the dopamine reward, thus making it so you don’t crave them. Resisting the initial temptation makes it easier to resist the temptation in the future, and instead of getting dopamine boosts from sugar, you’ll get them when you eat your healthy meals. Soon enough, your brain associates good food with dopamine rewards, and you’ll start to find yourself wanting to eat something healthy when you want a rewarding brain boost.

Eating smaller, more frequent meals, or meals with healthy snacks in between, can also help keep your brain feeling rewarded, and thus less likely to want those dopamine-boosting bad boys like sugar and sweets.

There are also nutritional elements that you can ensure are in your diet to make your body less dopamine-seeking, thus less craving of those unhealthy foods period. Research suggests that Iron, Vitamin B6, Folate and Vitamin E are key to maintaining healthy levels of dopamine and dopamine receptors in your brain, so you get the proper reward you deserve from your healthy meals, too. By keeping your brain dopamine-stocked at natural levels, you make it so you don’t need super stimulus like a Cinnabon to get the dopamine flowing. 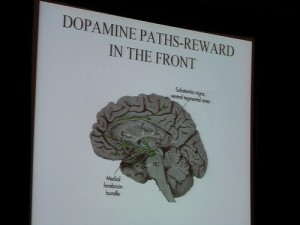 Dopamine pathways in the brain thanks to flickr user mathplourde.

There’s also some research which suggests that Flavonoids, those lovely antioxidants found in berries and red wine, promote healthy dopamine neurons. So ensuring that you make room in your diet for some blueberries isn’t a bad idea, either.

Keep in mind that research into how exactly dopamine relates to eating – what we eat, how we eat, etc – is still very new. While we know quite a bit, new studies are released every day which increase our understanding of this incredibly complex system. It’s not a good idea, yet, to try to take any kind of dopamine supplement or drug for weight loss or management, as extreme excess dopamine can have devastating neurological effects. For that matter, direct dietary ingestion of dopamine is a fruitless endeavor, since dopamine itself can’t cross the blood-brain barrier.

In short, there’s no easy way out of this one: you have to just eat right, daily, to train your brain to enjoy it. It’s like exercise – you’re never going to get in shape without putting in the hours, no matter what the infomercials try to tell you. You won’t have a healthy, level and balanced dopamine system until you cut out the extremely-excessive calorie foods and eat healthy day in and day out. Eating a well rounded diet is the best way to make your body crave a healthy diet.