Actor Jeremy Piven announced yesterday that he will leave the David Mamet play Speed-the-Plow because he has a mercury level running almost six times that of a normal person.

Piven complained of fatigue and exhaustion since the play’s opening, which was back in early October. His doctor, Dr. Carlon M. Colker of Peak Wellness in Connecticut, said that all of Mr. Piven’s routine medical tests came back at acceptable levels, but, after reviewing what he knew about Piven – who liked to consume sushi sometimes twice a day – Colker decided to check Piven’s mercury levels. 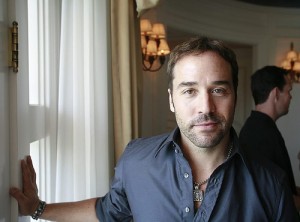 The results showed Piven was suffering from fatigue related to significant mercury exposure. He apparently decided to push on and continue to perform in Speed-the-Plow but that decision proved too ambitious. Later in the week, Piven was hospitalized for severe exhaustion after which his condition and his removal from the play was relayed to the production staff.

Public reactions were quick and sharp. Piven’s history as a bit of a Hollywood playboy have haunted him as this situation has unfolded. Some claim his departure is merely an excuse to leave the rigorous schedule Broadway demands. The playwright Mamet had this to say about his former star:

“I talked to Jeremy on the phone and he told me that he discovered that he had a very high level of mercury. So my understanding is that he is leaving show business to pursue a career as a thermometer.”

With the Hollywood mud flying, Dr. Colker went on ABC’s Good Morning America to try and clear the air for Piven.

“We were very transparent about the fact that [Piven] had a mercury level that was shockingly high. It was almost six times the upper limit of the allowable reference range. He had very severe symptoms of fatigue and exhaustion at the beginning of the run of the show. We were basically going to tough it out and see how it went. I [Colker] acquiesced and let him go ahead and do that as we initiated treatments that were trying to get his mercury levels down.”

“His symptoms had progressed, the neuromuscular fatigue began to come into play and, at that point, I would be remiss if I didn’t say ‘I think you need to step away from this’. Keep in mind, Jeremy is known as an absolute iron-horse when it comes to Hollywood and acting….It was up to me to step in and pull the reigns back in.”

So the big question everyone wants to know is whether or not Piven is telling the truth or lying about the severity of his condition. Admittedly, the preliminary stages of mercury poisoning would be one of the easiest conditions to fake because, initially, it only exhibits itself in very strange ways that could easily be dismissed. General neuropathy (numbness), profuse sweating, raised heart rate and general fatigue are the most likely outward manifestations. Any of those conditions by themselves or even taken together can be casually dismissed, but they shouldn’t.

Recall that in Dr. Colker’s interview above he mentioned the condition of “neuromuscular fatigue” and how it was starting to take a toll on Piven. What the good doctor was really talking about is the way mercury disrupts brain-to-muscle signaling. 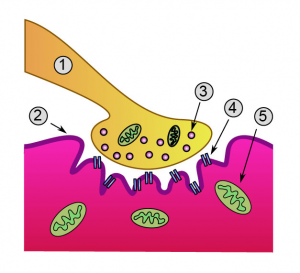 A synapse, where mercury attacks

When Piven is out on stage, his brain, like yours, fires incredibly specific signals to key muscle groups so that he can perform. Neuromuscular junctions are where the brain ‘hands off’ its commands to the muscles – and this is where mercury comes into play.

Mercury inhibits a key, relay neurotransmitter called acetylcholine, disrupting the way it normally binds and signals brain-to-muscle messages throughout the body. Bad signaling means the body has to work much harder to perform basic functions, resulting in an exhausting and seemingly unexplainable fatigue from which Piven was likely suffering.

Beyond this initial stage of damage, mercury also severely disrupts the foundation of thought – neurons. The brain operates much like the microprocessor in your computer by firing a rapid symphony of tiny, neuronal-electrical signals throughout your body. Mercury can lay waste to the machine of your mind by literally tearing apart the electrical signaling equipment in your brain.

Specifically, mercury ions bond with tubulin, the protective coverings that surround the electrical impulse-generating neurofibrils of each neuron. Those mercury ions cause the tubulin to literally disintegrate. Any neuron close enough to the mercury exposure suffers this fate. Worse yet, mercury’s fat solubility means that it tends to settle in the brain because the brain is the fattiest thing in your body, believe it or not. This video below shows just how destructive mercury is inside the body:

Left untreated, severe mercury exposure can cause far greater problems by narrowing the field of vision, completely stopping all muscle function and even driving the afflicted to insanity – resulting in a fatal, tortured paralysis called Minamata’s Disease. Lest we forget, mercury plays a role in neurological disorders like Parkinson’s, Alzheimer’s and likely autism.

Obviously, Piven was a long way from any of these diseases but his extremely elevated mercury body burden makes it completely plausible that his fatigue was caused by the mercury from his sushi habit. Piven’s conditions of extreme fatigue and exhaustion that required a hospital stay fit the profile of mercury exposure very well. It is also highly unlikely a credentialed doctor would go on national TV, risk his career and lie about his patient being hospitalized. Considering all this, there is a very good chance Piven is telling the truth.

Where does all this mercury come from?

Beyond the Hollywood finger pointing, Piven’s condition is important because it could have easily been anyone else who casually enjoys eating fish that finds themselves in this same position. The real question for you needs to be why fish have so much mercury in the first place. The answer has far less to do with Hollywood’s trendy sushi joints and far more to do with West Virginia’s coal mines.

Coal, the enemy of every climatologist worried about global warming, also pollutes our environment with significant amounts of mercury. The exact amount is hard to calculate but a 2005 statement by the EPA suggests at least 48 tons are released into the US atmosphere annually. Remember, this doesn’t even count China, who is estimated to open one or two new coal power plants every week.

The mercury flying out of all these coal power plants is chemically transformed by bacteria into methylmercury once it finally falls back to the ground, often many miles from where it was emitted. Mercury first creeps into the water supply where it is absorbed by aquatic microorganisms. From here mercury works its way up the food chain in a process known as bioaccumulation. 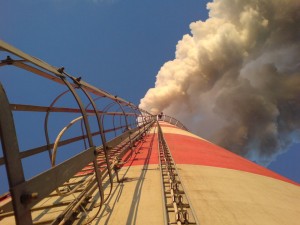 Your source for mercury

The smallest sea creatures, plankton, feed off the microorganisms, which are later swallowed by bottom dwelling fish. These smaller fish get eaten by larger fish which are eventually eaten by human beings, transferring mercury up the food chain. Not surprisingly predatory fish like shark, swordfish and tuna that sit atop the aquatic food chain have the highest mercury concentrations (see a full list here). When we eat these fish, our bodies rapidly absorb the methylmercury – and we all find ourselves in a situation not too dissimilar from Piven.

This situation could be different. Many techniques and technologies currently exist that can take out 95%+ of the mercury emitted from coal power plants. Such a move would have dramatic, positive benefits across our society but regulatory agencies like the EPA have been extremely slow in promoting new standards for typical reasons like bureaucracy and corruption. Ironically, the EPA has recently been publicly criticizing the FDA for its lax guidance of mercury laden-fish, the pot calling the kettle black if ever such a situation existed.

Still, the push for coal remains strong. Let’s hope Piven’s high-profile nature helps to create a real discussion about getting mercury out of the world’s coal plant’s, waterways, fish and our bodies.