In general, we think of plastics as non-flammable. Sure, the pyromaniacs among us have put a lighter to picnic cutlery to see what happens, but for the most part we know they melt, not burn, and are not exactly the best source of tinder or firewood.

But that’s not actually true. Almost all pure plastics are inherently flammable. When exposed to heat and flame, the polymers in plastics split into smaller, more volatile pieces. As oxygen reacts with these new compounds, more heat is produced, further ensuring a combustion reaction. This chain reaction continues until all of the plastic is broken down.

Even with flame retardants, plastics can burn – Pic by tronics on flickr

On top of the actual flame, burning of plastics can also be dangerous as it can create toxic gasses from the chemical components. Thus, as you can imagine, flammability is a huge problem for plastics used anywhere where heat might occur – near currents in electronics, in the kitchen, even furniture. The only thing that keeps most plastics from going up in smoke are the flame retardants mixed into the plastics themselves.

Keeping the Flame at Bay

Flame retardants act to stop the chain reaction that heat and flame cause, either slowing or preventing the spread of the fire all together. Almost all plastics that we come in contact with have added flame retardants in them to prevent ignition. One of the most popular types of compounds used in plastics are brominated flame retardants. As the name suggests, they all contain bromine. These are applied to 2.5 million tons of plastic polymers annually. One particular group, polybrominated diphenyl ethers (PDBEs), are used so much that the world consumes 40,000 metric tons of it every year, with 34,000 or so of those being manufactured in North America.

The variety of products that use brominated flame retardants is astounding. They’re in:

They’re so well used by the industry because they work great. Not only do they prevent ignition, they slow the spread of fire, giving anyone near it precious extra seconds to escape.

Of course, like the other compounds added to plastics, brominated flame retardants and PDBEs don’t all stay neatly wrapped up in the plastics they’re added to. They, like BPA and phthalates we covered earlier, tend to leech out into the environment, which is where the danger sets in.

What Are PBDEs? And why are low levels potentially dangerous?

PBDE, in its chemical glory

With over 209 different compounds used, polybrominated diphenyl ethers (PDBEs) are the largest group of brominated flame retardants used in plastics. They’re split into two types: “lower brominated,” or containing less than 5 bromines, or “high brominated,” with more than five. The big concern is with the more popular lower brominated PBDEs, as they are known to bioaccumulate.

Most of the time, we worry about acute exposures. That’s when the body has a sudden, high dose of something bad for it, to the point that it can’t deal. For example, if you chug a 24 pack of Bud Light in less than an hour, you’ll probably get acute alcohol exposure and be rushed to the hospital. But, odds are that if you are treated fast enough and have your stomach pumped, you’ll be fine in a few days. Your body processes alcohol fairly quickly – though it might not seem like it when we’re horribly hungover. In that sense, most people don’t have to worry about PBDEs. While common, your daily exposure is pretty low, so unless you go chugging chemicals at a plastics plant you’re not likely to suffer from acute exposure to PBDEs.

Bioaccumulation refers to the amount of a substance, usually toxic, that occurs in an organism over a much greater period of time. It occurs when a substance is absorbed or stored at a faster rate than it is lost, causing it to ‘accumulate’ in the body. When bioaccumulation occurs, smaller environmental levels can have a much larger impact.

Imagine if every time you had a drink, your body simply couldn’t get rid of the alcohol in the beer, and instead, it lingered in your tissues. You could have one drink a week, but still within a few weeks you’d be drunk all the time. That’s what happens with PBDEs – they sit in your body, and don’t go anywhere. Unlike BPA where you have to have a threshold daily dose for effects to occur, PBDEs can be toxic at extraordinary low daily doses – it just takes longer for the effects to show. 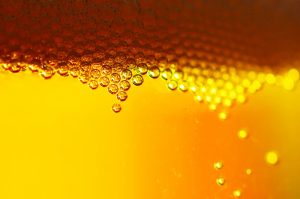 If beer bioaccumulated like PBDEs, we’d all be in big trouble, thanks to flickr user tambako for the stunning shot

PBDEs bioaccumulate in blood, breast milk, and fatty tissues. Because they’re so common, the average person is exposed to PDBEs from all kinds of places. You inhale them as they evaporate from building materials in your home and eat them when they leech from your tupperware. For that matter, it’s not just the plastics in your life you have to worry about.

Humans aren’t the only species that PDBEs bioaccumulate in, and as they become more prevalent in the environment, they become more prevalent in our foods. Significant concentrations have been found in popular foods like salmon, ground beef, butter and cheese. The higher up an animal is on the food chain, the more of a bioaccumulating compound it’s likely to have. And that’s not good news for us people, who reside squarely at the top.

There’s reason to fret about PBDEs – their close cousins have already been banned as health risks. You might have heard of them – polychlorinated biphenyls, or PCBs. They, too, were used as flame retardants, as well as other things, starting in the early 20th century. 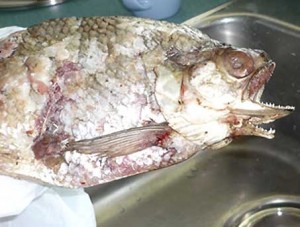 It became clear, though, by the 1970s that PCBs were seriously dangerous organic pollutants, causing birth defects, impairing brain and memory functions, and increasing the risk of some forms of cancers. But that was not before General Electric released up to 1,300,000 lbs of PCBs into the Hudson River, prompting the New York State Department of Environmental Conservation to ban all fishing in the upper Hudson due to unacceptably high health risks to anyone who consumed their catch. And, unfortunately, GE was not alone. The effects of PCB use still linger today, especially in aquatic animals. And PBDEs are already accumulating – research has shown that PBDEs are at least as prevalent as PCBs in Lake Michigan salmon, for example. 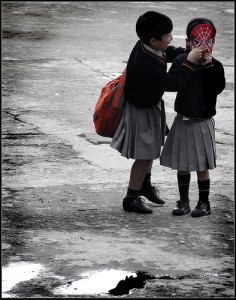 Like with all plastic chemicals, kids are at the highest risk (sukanto_debnath credit)

In the United States, PBDE concentrations are rising, especially in children. Toddlers and preschoolers have 3 times higher blood concentrations of flame retardants than their mothers – an average of 62 parts per billion. And adults aren’t off the hook. A study in Spain in 2003 found that adult men there were chowing down 97 nanograms/day in their meals. No study has looked at the daily intake in the United States, although previous studies have shown that Americans rank among the highest in bodily concentrations of PBDEs. U.S. mothers, for example, had concentrations of PBDEs 75 times higher than the average levels in Europe. And no one, anywhere, has studied how much of what we ingest stays in our bodies, accumulating in our fatty tissues.

While “parts per billion” and “nanograms” might sound like a very small amount, it’s still dangerous, especially for kids. Even a single, low dose given to developing mice caused permanent behavioral and neurological changes. Other studies have found that over time, PBDEs alter thyroid function, disrupt brain development, drive cells towards cancerous activity and even cause hyperactivity.

Unfortunately, the study of PBDEs is still fairly new. It wasn’t until after the fiasco with PCBs that PBDEs were phased into use, and research has not had the time to fully study the long-term effects of these chemicals. What we have seen, however, isn’t looking good. Blood concentrations are quickly approaching the EPA’s magical “safety limit” for people, and research continues to show lower and lower doses having detrimental effects on animals.

Where We Go From Here

The good news is governments are taking notice of PBDE and the dangers involved. In the 1990s, the European Union began replacing brominated flame retardants, and levels in breast milk there have decreased in response. They one-upped themselves in 2006 by flat out banning the use of certain PBDEs in electronics. In the U.S., states like California, Hawaii, New York, Michigan and Maine have already passed PBDE banning legislation, and other states are following. But the federal government has yet to listen to the complaints against PBDEs or take any action against them.

The bad news is, if you live where it isn’t banned, there’s not much you can do to avoid it. Even if you do live where it’s no longer added, older furniture and plastics will still contain PBDEs. The best you can do is support organizations like Greenpeace which seek to see PBDEs banned entirely or petition your local politicians to make it an issue. There are alternatives to brominated flame retardants, and new technology continues to find ways around using harsh chemicals to prevent fires. We should to our best to remind industrial companies that being cheaper doesn’t make a chemical better – we need to find new ways to make what we need without poisoning our children and environment in the process.