Truvia and PureVia – A Window to the Past or the Future?

In the coming weeks, we will be examining two new sweeteners called Truvia and PureVia that are being released into the American food supply in the first half of 2009.  They are derivative of a naturally sweet plant called Stevia, which has been used around the world for quite some time now to sweeten drinks and native dishes.   But before we dig deeply into the science around the new Stevia-based sweeteners, we think it would instructive to learn the history of synthetic sweeteners in America – as the past is usually the best predictor of the future.

Back to the Future

To understand Truvia and PureVia, you need to wind back the clock – all the way back to the 1900s.  Here you will meet a man named Harvey Wiley, a sugar chemist with Germany ancestry and deep roots in the American academic system.  He came to Washington in 1906 to become the Chief Chemist at the Department of Agriculture shortly after famed author Upton Sinclair dropped “The Jungle“, a scathing of the meat packing industry, onto the American public.  These developments were creating an environment ripe for change.

During that same time, physicians were starting to recommend reduced-sugar diets to help some of their patients.  This advice was based on an unexplainable (no longer) link between being overweight, inactive, having diabetes, and ‘debilitation’ in general.

As it turns out, our former president Teddy Roosevelt was just such a patient.  His doctors recommended jumping onto the newest artificial sweetener of the day, saccharin (today – Sweet ‘n Low), to reduce his sugar intake, presumably to prevent diabetes.

Realizing the President was regularly consuming the additive, Wiley, ever the scientist, took immediate issue.  Here is an exchange between the two as they discuss potential actions against the additive [emphasis mine]:

Wiley was quite obviously a man of a different sort.  Anyone brave enough to get in a President’s face is not short of courage.  That same courage caused Wiley to take a different route. He and a brave group of human guinea pigs, nicknamed the ‘Poison Squad’, went about testing food additives – including saccharine, borax and formaldehyde – by ingesting them and reporting on what happened.   This group of hardy souls was only allowed a controlled amount of water & food while they ingested chemicals (‘in a hygienic environment’ of the day) and collected all their excrement for examination.

Crude as it was, Wiley’s Poison Squad were conducting the first food additive studies. These theatrical studies were reported widely across the media, especially in the Washington Post – building Wiley’s magnanimous character.  These events, coupled with ‘The Jungle‘ finally culminated in the passage of the Pure Food Act of 1906 that established the FDA and Wiley as the ‘Father of Pure Food‘.

As Upton Sinclair, the ardent socialist, famously noted about his Jungle treatise intended to stoke a populist backlash against unsafe labor conditions,

“I aimed at the public’s heart and, by accident, I hit it in the stomach.” 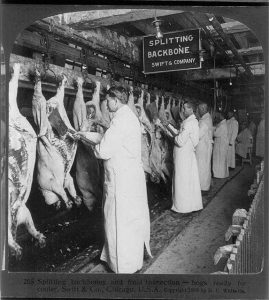 And The Lobbying Begins

“At the request of the Secretary of Agriculture, the Referee Board of Consulting Scientific Experts has conducted an investigation as to the effect on health of the use of saccharin.  The investigation has been concluded, and the referee board reports that the continued use of saccharin for a long time in quantities over 3/10ths of a gram/day is liable to impair digestion; and that the addition of saccharin as a substitute for cane sugar or other forms of sugar reduces the food value of the sweetened product, and hence lowers its quality.

“If the use of saccharin be continued, it is evident that amounts of saccharin may readily be consumed which will, through continual use, produce digestive disturbances.  In every food in which saccharin is used, some other sweetening agent known to be harmless to health can be substituted, and there is not even a pretense that saccharin is a necessity in the manufacture of food products.”

Shortly thereafter, a pattern familiar to all 21st century citizens began.  An attorney representing the saccharin manufacturing corporation, Sherman Brothers, published a threatening letter to the New York Times, emphasizing the cost benefits of saccharin while claiming that the amount of saccharin required to do damage was significantly higher than anyone would consume in a single bottle of soda.  From the Times piece [emphasis mine]:

“Saccharin today is almost exclusively used in soft drinks, “pop,” soda water, etc., and reduces the cost of the same.  3/10ths of a gram of saccharin – the quantity declared by the Remsen board to be innocuous – will sweeten thirty bottles of pop or soda water; and it therefore appears to be a physical impossibility for any person to absorb a dangerous quantity.  With sugar advancing in price, with a saccharin in moderate quantity approved by the highest scientific authority in the land, I am at a loss to understand the animus of the editorial article above referred to.”

How the mighty have fallen…

Only a year later in 1912, the newly formed FDA reversed their position, claiming the sweetener was safe.  This pattern would play out many more times.

The battle of saccharin would take a breather for awhile but resurface in the late 1960′s after a studies unearthed 1940′s era research from the FDA that showed how saccharin caused bladder cancer.  A flurry of research started up again and a move by the FDA to ban the substance gained momentum in 1977 after watching saccharin formally banned in Canada.  Instead, the US congress blocked the ban and a warning label was issued instead.  That lasted until 2000 when it too was dropped for unclear reasons.  Subsequent scientists have spoken out about the additive but as of February 2009, it remains readily available in the United States.

What are we to think?

This now common back and forth policy is attributable to the way in which money sways political fervor, not as if this revelation should be news to you.  It nonetheless bears repeating because we are about to welcome still two more additives, Truvia and PureVia, into our lives in the coming months.

The saccharin debate has stretched nearly 100 years but it is just one of many chemicals to suffer such a tumultuous fate – rGBH, DDT, Aspartame and most recently the plastic additive Bisphenol A have all followed this similar path.  Each is worth their own story but the take home point is the same – additives come with consequences.  All of these wonder chemicals come with side effects, some of them quite severe.

And that brings us back to Truvia and PureVia – and why they may finally break this cycle.  The hope with the newest agribusiness additives is that they are actually based on something in nature – Stevia – so the thinking goes that they may bring the promise of a reduced calorie sweetener that does not impair people’s health.  None of the artificial sweeteners currently for sale can legitimately make that claim today.

The characters surrounding these various debates constantly changes but Wiley and Roosevelt would largely find the song remains the same – nearly 100 years later.

NOTE: This article is the 1st part of a series about Truvia and PureVia. You may want to read the next two parts to better understand this issue: