Truvia and PureVia: The Controversy of Stevia

In our final view of Truvia and PureVia, we take a look at the political history of stevia – the base of rebiana, opinions of some of the major players in this debate and offer our final views on the subject.

NOTE: This article is the 3rd part of a series about Truvia and PureVia. You may want to read the first two parts to better understand this article:

A History Spent in the Shadows 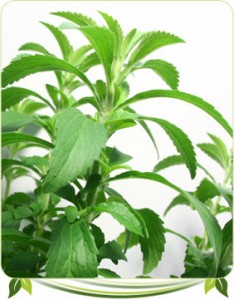 The plant stevia provides the rebiana sweetener found in both Truvia and PureVia.  Originally, stevia was used, in its whole leaf form, as a prized sweetener of the indigenous Guarani people throughout Paraguay in South America.  It did not find fame in the modern, western food supply until Japan began cultivating and using it in diet soft drinks (including Diet Coke) during the 1970s, a process that continues today.  Building on that success, stevia began to be sold throughout the world, including the United States, during the 1980s.  Its path from here has since become mired in controversy.

Stevia was officially banned from sale in the US as a sweetener in 1991, driven from the market after an anonymous safety petition led the FDA to conclude that it was an unsafe food additive.  The FDA has declined to release the petitioner’s affiliation, although it is suspected to be someone with links to aspartame – a popular artificial sweetener that had just come to market in the 1990s.

Because of the 1991 decision, an ‘Import Alert‘ was then issued by the FDA maintaining that information regarding stevia leaves – the same source of Truvia and PureVia – was [emphasis mine]:

“…inadequate to demonstrate its safety as a food additive or to affirm its status as GRAS” (GRAS = Generally Recognized as Safe, FDA speak for labeling that recognizes a product’s safety).

This position is at odds with just about every other natural food in existence.  Because the FDA has no mandate to test real foods, it makes little sense why this decision was made.  Any food ‘in common use’ before 1958 was automatically grandfathered into being deemed GRAS, and so – with stevia’s history of being safely used as a sweetener in South America for centuries – it clearly qualified.

We contacted the FDA but they declined to comment on this position.

A Change in Position

Stevia was completely banned from the United States until 1994, when the the Congress passed legislation that allowed stevia to be used solely as, ‘an herbal supplement’.   Interestingly though, the sweetener was still banned from being sold as a sweetener.  This contradictory stance established in 1994 – where stevia remained banned from sale as a sweetener but remained for sale as a supplement – continues clear into today.

The closest we can get to a followup opinion from the FDA on the matter doesn’t come for another 8 years.  From the FDA’s now discontinued magazine named, appropriately enough, “FDA Consumer Magazine“, this was the only other mention of stevia on the FDA’s website for almost 15 years [emphasis mine]:

Another product, stevia, is derived from a South American shrub. Though it can impart a sweet taste to foods, it cannot be sold as a sweetener because FDA considers it an unapproved food additive. “The safety of stevia has been questioned by published studies,” says Martha Peiperl, a consumer safety officer in FDA’s Office of Premarket Approval. “And no one has ever provided FDA with adequate evidence that the substance [stevia] is safe.” Under provisions of 1994 legislation, however, stevia can be sold as a “dietary supplement,” though it cannot be promoted as a sweetener.

Ms. Peiperl of the FDA is referring to the idea that one of the two sweeteners in stevia called steviocide, might cause mutations in the DNA of people who eat it regularly.  As we reported in our scientific review of rebiana, the studies that suggested stevia was mutagenic were widely dismissed because the amount of stevia required to cause the defect was so far in excess of what anyone could ever possibly consume.

They say OK to stevia

Stranger still, after a large review of scientific literature, the World Health Organization declared in 2006 that stevia is completely safe and even potentially beneficial for people with hypertension (WHO).  That opinion was further codified at the 69th annual JEFCA (Joint FAO/WHO Expert Committee on Food Additives) conference (.pdf link), where stevia was recognized as being non-mutagenic.

Clearly, quite a few scientists could have “provided FDA with adequate evidence that the substance [stevia] is safe” in Ms. Peiperl’s words.  The only problem was that the FDA never asked to reevaluate stevia, for what are likely political reasons from what we have seen so far.

In December 2008. the FDA opened yet another chapter in this debate and declared that rebaudioside A (rebiana) – the other sweetener found in stevia – was GRAS.  Somehow, ABC News broke this story:

From the official GRAS approval letter:

The subject of the notice is rebaudioside A purified from Stevia rebaudiana (Bertoni) Bertoni. The notice informs FDA of the view of Cargill, Incorporated (Cargill) that rebaudioside A is GRAS, through scientific procedures, for use as a general-purpose sweetener in foods, excluding meat and poultry products, provided that food standards of identity do not preclude such use, at levels determined by current good manufacturing practices (cGMP).

Obviously aware of yet another policy contradiction, the FDA puts out a one-line statement in the GRAS notice about stevia, the plant that remains banned as a sweetener [emphasis mine]:

The wording of this final statement here is especially interesting because the FDA is leaving the door open for yet further interpretation.  If this decision ‘does not necessarily apply’ to other uses of Stevia, companies that want to use stevia in their products may be able to petition the FDA for yet another policy change. Regardless, despite rebiana being approved as GRAS, stevia can still only be sold as a dietary supplement, not as a sweetener.

From the Peanut Gallery…

Nutrition Wonderland repeatedly tried to get in touch with different offices inside of the FDA to clarify their contradictory positions regarding stevia and rebiana but our calls were never returned.  Without a direct comment from the FDA, we can only speculate as to what was happening with regard to their policy – but that position really isn’t that hard to ascertain from the evidence.

How the mighty have fallen…

Based on the financiers of the rebiana studies (Cargill and Coca-Cola), the speed with which this decision was made and the history of stevia, we are left to conclude that rebiana- and consequently Truvia and PureVia – were simply approved because of who petitioned the FDA.

Now, the FDA’s ruling does not mean that rebiana is not safe – but then again we don’t know that it is completely safe.  It’s hard what to know here.  We do know one thing though – with giants like Coca-Cola, Cargill, PepsiCo and Merisant banging at the FDA’s door, it becomes pretty obvious that there was little chance rebiana would be kept out of the market, regardless of what the science said.  The FDA’s position on stevia has never (well, post 1991 at least) sided with science.  This decision brings into question many of the other food additives that the FDA has approved, namely aspartame – whose makers may have been active in getting stevia banned.

Nutrition Wonderland also contacted the Center for Science in the Public Interest (CSPI), a reputable food watchdog, who was cautiously optimistic about Truvia back in June 2008 in a WebMD article.  They have since dramatically reversed their position based largely upon new information from a report put out by UCLA showing why rebiana and stevia in general is unsafe.  You can view it below:

We read over its arguments as to why rebiana is unsafe in this report but they are not as convincing as CSPI would have you believe.  While rebiana is not fully tested, this report finds fault with nearly every study published to date on the subject of stevia.  Its hard to buy into the idea that this much bad science was performed.  Nutrition Wonderland has extreme doubts about the Truvia-sponsored science we thoroughly discussed in our earlier review but the safety of stevioside seems well proven, based on its use in Japan for over 30 years.  Additionally, this report may have been performed at the behest of CSPI itself, making us leery of its findings as much as we are leery of Cargill’s.

We contacted the CSPI repeatedly to make sense of their changing positions but they have not made a public statement to us regarding this situation.

In general with food, we see a destructive pattern with each refined product brought onto the market place.  Whole grains reduce the risk of heart disease while refined grains increase it.  The fructose in honey helps the body, while the fructose in HFCS has been linked to obesity, diabetes and insulin resistance.  Cold pressed natural oils dramatically reduce inflammation, while heavily refined hydrogenated oils promote inflammation – and chronic disease.  Why refined rebiana would be better for us than the whole leaf stevia has not been explained.

There is some reason to think extracts of stevia, specifically stevioside, could prove extremely beneficial in a refined form but Truvia and PureVia do not contain any of that material.  Both sweeteners are proprietary formulas containing the largely untested rebiana and large amounts of erythritol, another non-caloric sweetening agent.  In fact, by volume, Truvia and PureVia have more erythritol than they do rebiana.  There is still no science testing Truvia and PureVia themselves, which would show how these two sweeteners (rebiana and erythritol) metabolize together.

More than anything, Nutrition Wonderland strongly believes these sweeteners were developed so that the companies involved, especially Cargill and Merisant, could own the intellectual property behind stevia – in effect owning the food.  Cargill released some justification for all this trouble, if you don’t mind very corporate video:

It would have been far easier to just use stevia for commercial food production – but, since you cannot patent a natural food, this opportunity was overlooked in our opinion.  This pattern of using the intellectual property of food for profit is well established across the 21st century agribusiness industry, modeled after highly successful power plays by chemical giants in the sale of GMO seeds.

We have doubts about the sponsored science involved, doubts about the motive of this product in general and deep suspicions as to why stevia remains banned from the marketplace.  Truvia and PureVia may in fact be perfectly safe – and preliminary science shows that to be the case – but far more research on these new sweeteners is required.  Even still, we will probably never know the truth.  It is now the American public’s turn to be the guinea pigs for another agribusiness experiment.  You can easily opt out of this debate – as we are – by enjoying any of these safe sweetening options: