ith the recent spat of recalls surrounding pistachios and peanut butter in the US, there has been a large response from the public to better safeguard the food supply. Industry is also starting to warm up to the idea because the cost of recalls are enormous. Food lawyer Bill Marler puts the cost of just the peanut recall alone at $1 billion dollars.

The cries for change come amid another small scale outbreak observed in April 2009 regarding alfalfa sprouts in the NE US (follow the link for more information from the FDA).

With all this tainted food floating around the food supply, the US congress says it wants change. The first step towards change has been the now familiar hearing between corporate officers and a Congressional subcommittee. You can see some of the testimony about the salmonella outbreak in peanuts here:

Out of these meetings has come different ways to address the public’s concerns. Here we review some of the options currently being discussed against the wisdom of some leading food safety professionals.

The most hyped up pronouncement from Congress has been HR 875. Introduced by Rep. Rosa DeLauro (D-Conn), the Food Safety Modernization Act of 2009 is a response to all the food safety crises that have happened in the first part of this year. The bill has gotten a lot of press in the last couple weeks and most of it has been negative. 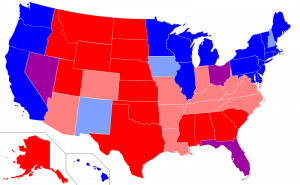 All political ideologies seem to be enraged by this bill. The far left sustainable agriculture crowd is noticeably upset that the bill lumps together factory farming operations with local agriculture, making everyone submit to the same rule set. The far right group Reason asks about HR875′s impact on the ability to farm for yourself. This bill was also prominently featured in many of the politically right ‘Tea Parties‘ that happened on tax day.

Both sides seem to focus on just one provision in the legislation – Section 3, Article 14, where a food production facility is defined so broadly as to encompass everything from a dairy farm to your mother’s backyard. From the bill:

DeLauro came on the Huffington Post to defend her motives and dissuade some of this bad press, claiming the far right was responsible for a disinformation campaign. She essentially argues all these fears are bogus because the commerce clause of the US constitution – the one that allows the US congress to regulate trade in the first place – only applies to interstate trade, not hyper-local farms and neighborhood gardens. (Unfortunately, that strict constructionalist view of the constitution has not been upheld by the Supreme Court, so DeLauro, et al. would need to formally make a provision for them in the legislation to get passed this political impasse.)

The senator also posted a rebuttal to all this criticism on her own website. You can view it here:

Once you get beyond the political dimension, the big takeaway from HR 875 is that it would split the FDA into two new government agencies. A ‘Food Safety Administration‘ would be formed inside of the existing Department of Health and Human Services (HHS) and be in charge of all things food while the FDA would largely turn into a ‘Drug Administration‘ with each new agency holding exclusive sway over their own fiefdoms. This is radical departure from the current system which uses a patchwork of provisions in many agencies across the government.

This dual agency approach is largely applauded by the farming activist circuit, despite all the bad press this bill has gotten. Food and Water Watch tentatively agree with the position and so do the Trust for America’s Health + Robert Wood Johnson Foundation but problems still remain with this approach.

Many food safety functions are carried out by the USDA and since HR 875 only addresses the FDA, most meat products (beef, fish, chicken, etc) would languish inside of our old system. Not to mention, the local dimension to food safety remains noticeably absent in HR 875, as no specific provisions for that group are included.

The other major bill before Congress is H.R. 759, The Food and Drug Administration Globalization Act of 2009. This is a different approach at fixing food safety by modifying the FDA extensively, giving the agency far more authority to conduct inspections and take action based on what it finds while keeping it intact. But, in an even deeper blow to local farming, the rules of HR 759 apply generally to all size farms and restaurants, which obviously tips in favor of large-scale farming. Even worse, the FDA’s increased surveillance costs are shouldered by the very farmers they are evaluating. Parts of the bill get extremely complicated in how these fees are determined but here is a sample from the top section:

‘(a) In General- The Secretary shall assess and collect a fee for a facility registration under section 415 to defray increases (as described in subsection (f)(2)(A)(ii)) in the costs of inspecting establishments registered under section 415 and for related activities to ensure compliance by such establishments with the requirements of this Act relating to food (including increases in such costs for management of information, and the acquisition, maintenance, and repair of information technology resources).

Some of the language is so vague that local farmers might have reason to be concerned. These fees very wildly depending on what kind of an operation each farm and restaurant turn out to be; later in the bill it explains how these fees scale – a process that will likely see great change in the sausage maker of Capitol Hill. Additional costs from this bill are also substantial inside each farm and restaurant, as it extends electronic bookkeeping to these establishments for the first time.

In this bill’s implementation, all of these fees are heavily tilted toward industrialized, large scale agriculture. These fees will likely be a far lower percentage of their gross income; think of these fee provisions as regressive farm taxes. With closer inspection, HR 759 looks far more dangerous to local farming than HR 875 – and because it takes a more pragmatic approach to revising the FDA, Food and Water Watch thinks it has a much better chance of passing.

Leading researchers from The George Washington University take a different path than any of these bills. They advocate for a similar system to HR 875 (link is a long read) but even more extensive, pulling departments from other agencies like the CDC and the USDA into the fold. They still concentrate food safety into the HHS department in their excellent position paper. Here are some of the major ideas from the paper:

“Congress should direct the Secretary of HHS to create, in collaboration with the states, a National Foodborne Illness Data Program.”
“Congress should establish and fund an intergovernmental Food Safety Leadership Council
(FSLC) through which the federal government would collaborate with state and local
governments to design and implement an integrated national food safety system”
“Congress should establish traceability requirements that permit federal, state, and local ofﬁcials to rapidly obtain from food companies reliable information on the source of commodities, ingredients, and finished products.”

The way they advocate for local involvement is far different from any federal approach, and it appears to be based on good research evaluating how the system currently works in the real world.

Connecting a new food safety system to existing local agencies appears to be a crucial step most of the currently pending approaches before the Congress fail to address. Most recalls start on a local level so those stations need to be able to coordinate a response with federal officials, especially considering just how global the food supply is now. Other best practices safety implementations like the HACCP system Marion Nestle passionately supports need to be incorporated into whatever final legislation is adopted.

Who is in charge of me?

There is also the question of how phytochemical plant-based supplements/drugs would fall in this dichotomy. Right now, the FDA regulates food supplements very loosely, while putting many screws to any drug that claims to treat or prevent a disease. A semantic tip-toe has existed within these fields for years; the main difference between drugs and supplements is that supplements are directly sourced from food and herbs while drugs are proprietary creations from pharmaceutical companies. While there is already a supplement regulation act (however flawed it is), an expanded FDA or revised dual-headed Food Agency/Drug Agency setup could seriously change how we view this category of products – and it is a huge industry now. This issue could get very contentious.

One thing is clear though – our current food safety system is not working. We need something better and if you read our last piece on food safety, you know many interested parties have been advocating for just such an overhaul for more than 20 years. Now is clearly the time as the public is finally focused on the issue. Many good ideas are floating around but just as many bad ones are as well. Let’s hope Congress is listening to the roar on the internet from HR 875 and they include protections for small scale agriculture.