ost of us already know that we should be eating fiber – according to the Institute of Medicine, adults should be eating 20-35 grams of it per day. But why? What’s so important about fiber anyway? What does it do for us physiologically? And does it matter what kind of fiber we eat?

I can hear some of you now – wait, there’s more than one kind of fiber? Yes, there is, though you won’t see it detailed on any nutritional label. Most of the time, we’re told to simply focus on total fiber , no matter where it comes from. While getting enough total fiber is key, getting enough of each kind of fiber may be just as important in having a healthy, happy digestive system.

What is Fiber? And what does it do? 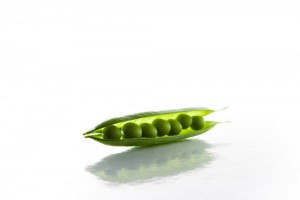 Peas, an excellent source of fiber – thanks to Sami Taipale flickr

There are two main categories of fiber: soluble and insoluble. Soluble fiber dissolves in water, while insoluble fiber, as the name suggests, doesn’t. The average American fiber intake contains 75% insoluble fiber and 25% soluble fiber, each having its own special physiological impacts on digestion.

Insoluble fiber, like the fiber in whole wheat foods, bran, nuts, and seeds, mostly helps by simply being there. It’s what forms the mass that moves through your bowels, and while that might sound a little gross, it’s key to preventing conditions like diarrhea and constipation. Because it stays in a solid form, it helps compact the forming stool, which allows it to move more easily through the intestines. Some health professionals also believe that insoluble fiber acts like a sponge or scrub brush, cleaning the digestive tract as it goes along by gently scraping the walls and snowballing with stray particles so they are removed from the body. 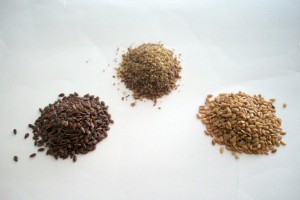 Soluble fiber, found in fruits, vegetable and flax seed, acts differently because it becomes gel-like in water, actually incorporating with liquids. Soluble fiber helps hydrate stool, allowing it to slip though the intestines smoothly, a key in preventing digestive disorders. But soluble fiber does so much more – often called “viscous fiber“, soluble fiber makes your digestive contents into a thick slurry, which slows down your digestive system, slowing the process of absorption in the small intestine.

The effect of this is that you feel fuller, longer, because of slower, steadier increases in blood glucose levels, and your body requires less food to attain the same absorption of energy and nutrients. One study found that adding one kind of soluble fiber to their subject’s diets reduced the their food intake by 11%!

But soluble fiber also helps regulate the levels of glucose in our blood more directly. Soluble fiber is often fermented during our digestive processes, producing compounds called short-chain fatty acids and gasses (FYI, this is where increases in flatulence can come from when eating beans – legumes are high in soluble fiber and fructo-oligo-saccharides).

Short-chain fatty acids have a number of physiological roles. These small fat molecules have been shown to directly influence insulin release from the pancreas and glycogen breakdown in the liver, leading to stable and healthy glucose levels. Short-chain fatty acids also influence the liver’s production of cholesterol. The effect of this is that increased fiber consumption lowers the circulating bad cholesterol in the blood. They’ve been found to promote the production of immune cells and antibodies, potentially boosting immune function. Furthermore, these little acids help regulate the pH (acidity) of the intestines and the colon, keeping it in the right range to promote nutrient absorption and discourage microbes from producing toxins and carcinogenic substances.

A good video review of this information can be found here: 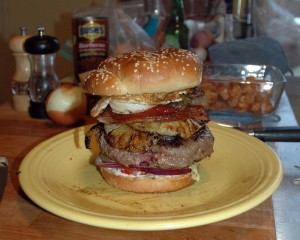 Mega Burgers, not so hot on fiber – credit, marshall astor

The old adage “an apple a day keeps the doctor away” may be more true than we thought. Apples are great sources of fiber, and both soluble and insoluble fibers help reduce the risk of a variety of diseases. One of the most well understood is fiber’s connection to diabetes. Because fiber slows down your digestive system, glucose enters your bloodstream at slower, more stable rate, and this helps with managing Type 1 diabetes. But fiber can help prevent Type 2 diabetes, too.

Type 2 diabetes can be induced by our diets when our bodies are exposed to high blood glucose levels for a long period of time. This can happen because of consistent over-intake of sugars and carbohydrates, but it can also occur because our bodies are unable to produce enough insulin to lower rising blood sugar levels, or we become desensitized to insulin activity. By creating a slow, steady stream of glucose uptake, fiber helps our bodies avoid the sudden spikes glucose and insulin that, over time, can lead to Type 2 diabetes.

Studies have shown that diets high in fiber reduce the risk of Type 2 diabetes significantly. For example, a meta-analysis of several large studies (totaling to over 700,000 people) found that eating an additional 2 servings of whole grains a day decreased the risk of Type 2 diabetes by 21%. Both soluble and insoluble fiber intake are correlated with reduced diabetes risk, though how the insoluble fiber is involved is less understood.

Fiber is also strongly linked to reducing risk of heart disease. This is likely due to its positive influence on blood cholesterol levels. A number of large, long-term studies have found that people with high-fiber diets have up to a 40% lower risk of coronary heart disease.

Furthermore, a meta-analysis of seven large studies found that the risk of developing cardiovascular disease was 21% lower in people who ate 2.5 or more servings of whole grain foods a day compared with those who ate much less. Mostly, these studies suggest that soluble fiber is the key player in preventing cardiovascular problems. Because of the extensive, strong correlation between soluble fiber intake and lowered risk, soluble fiber is one of the very few things that the FDA officially recognizes as reducing the risk of heart disease.

Furthermore, a recent study has found that increasing soluble fiber intake, but not insoluble fiber intake, actually helps boost our immune systems. Mice were fed low-fat diets that either contained regular amounts of soluble or insoluble fiber for six weeks before being subjected to an agent that mimics a bacterial infection. When the two groups were compared, the soluble-fiber eating mice were only half as sick as their insoluble-eating counterparts, and they recovered 50% sooner. What made the soluble fiber so much better for the mice?

Scientists discovered that the soluble fiber-eating mice were producing higher levels of anti-inflammatory compounds, perhaps due to short-chain fatty acids. Immune cells in our bodies have to deal with both invaders like infections and self-caused problems like inflammation. The researchers believe that by reducing the inflammation response, ingesting soluble fiber altered the mice’s immune cells, making them switch from problematic inflammatory cells to anti-inflammatory cells that can deal with other problems, like the faked infection. While this research is preliminary, it’s impressive that the mice immune systems were altered by manageable amounts of fiber that could easily be eaten by people.

The one thing fiber intake doesn’t help much with, though, is the one disease it’s most often touted as a way of preventing: colon cancer. The truth is that the connection between dietary fiber and reduced risk of developing colon cancer is weak at best. While some smaller studies have linked high-fiber diets to lowered risk of colon cancer, larger ones, like a 16-year Harvard study of more than 80,000 nurses, have found no connection.

The scientific evidence is unmistakable – fiber is vital for a healthy digestive system. More often than not, you’ll be told to simply eat more fiber, but from the evidence I’ve seen, you should be particularly eating more soluble fiber. And that isn’t the kind of fiber normally touted – often, you hear people push for whole grains, which are good sources of insoluble fiber, even though it’s soluble fiber that is much more strongly linked to fiber’s various health benefits. There’s another problem, too – according to nutrition labels, fiber is fiber. There is no distinction between soluble and insoluble fiber in packaged foods. Instead, you have to be your own nutrition expert, and know which fiber-filled foods are naturally high in soluble fiber. Here are a few good ones:

Of course, no matter what you should probably be eating more fiber. Studies have found that Americans eat 50% or less than the recommended intake every day! So while soluble fiber may be the best option, any fiber is a start!

What are the downsides to eating fiber? After all, it sounds so wonderful – there must be something bad about it, right? Well… there is the gas produced by soluble fiber fermentation, but that seems a small price to pay compared to the many benefits that fiber intake can have. Sorry to sound unbelievable, but no, in my opinion, there aren’t any real downsides. Actually, I’ll rephrase – there aren’t any downsides to eating the amount of fiber you get from the kinds of foods people eat, so long as you still get the necessary amounts of protein and other nutrients, too. Switch to eating entirely fiber-rich grasses instead of the normal grains, fruits and veggies and you might not fare so well. The only thing I will recommend, though, is that if you plan on dramatically increasing your dietary fiber intake, do it somewhat slowly to allow your body to adjust to the rise in non-digestible material in your diet. This will help you prevent the only known clinical side effects of sudden, high-fiber intake – tummy trouble.