Understanding Our Bodies: The Role of Antioxidants

It seems like every day there’s a new super-food that is chock full of antioxidants and ready to cure everything from the flu to cancer. Antioxidants are touted as a nutritional panacea, but I would bet that few people really understand what antioxidants are, how they function in the body, and how including them in their diet makes an impact. 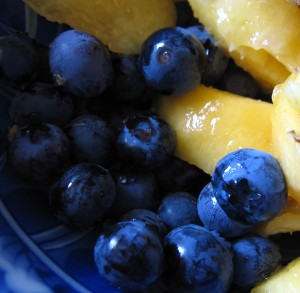 These are the antioxidants you want – from flickr user crabchick

Are antioxidants good for you? The short answer is yes, but buyer beware. Just because something is good for you doesn’t mean you should start taking a giant mega-dose of it. Antioxidants are great when the come from natural sources as a part of a healthy diet. But like everything else, a closer look at their physiological action explains why you can get too much of a good thing.

It’s All About The ROS

In human cells, like other eukaryotes (everybody but the bacteria), energy is made in a specialized cellular structures called mitochondria. Mitochondria are these strange, double-membraned organelles that are highly specialized – they contain their own DNA, make their own proteins, and are tightly regulated by the cell. Essentially, mitochondria are energy powerhouses, or the cell’s equivalent of a power plant. Below is a 3D view of the structure (thanks to T. G. Frey of San Diego State University):

Using a complex process, mitochondria take our fats, carbohydrates, and excess proteins and turn them into a four-carbon molecule called Acetyl CoA. This molecule goes through a series of reactions in what is called the Kreb’s Cycle which results in the creation of high-energy electrons taken from the bonds.

These electrons are then passed down a chain of enzymes which use the energy they possess to create a proton (H+) gradient between the center of the mitochondria and the between-membrane space, eventually reducing oxygen into water (O2 –> H2O).

It’s this proton gradient that is used to drive an enzyme called ATP synthase, which creates ATP, the functional energy molecule used by our cells.

But the system isn’t perfect. Every once in awhile, instead of making harmless water, the chain makes unstable oxygen molecules, which are referred to as free radicals. These molecules are dangerous to the cell because they are highly reactive – in other words, they attack chemical bonds – hence their other name, reactive oxygen species (ROS). They can cause damage to DNA, enzymes, proteins and many of the other vital components of a healthy cell.

Luckily, our bodies have innate mechanisms to deal with ROS, like the enzyme catalase which converts hydrogen peroxide (a kind of ROS) into water and oxygen. But as we age, our mitochondria get less and less efficient, producing more and more ROS. If too many ROS are produced and they overwhelm our innate damage repair mechanisms, our cells suffer, and either become non-functional or even cancerous.

That’s where antioxidants come in. Antioxidants are compounds which react with free radicals and neutralize them, thus protecting our bodies from oxidative damage by ROS. They vary widely and are found in all kinds of foods we eat every day. Perhaps the most famous antioxidant foods are the colored berries like blueberries and raspberries, which are chock full of a antioxidants like Vitamin C and Vitamin E.

So ROS are bad?

Well… like everything else, it’s not quite that simple. Yes, reactive oxygen species can be very damaging. Some scientists finger them as the direct cause of aging, and because of the damage they can cause, they are thought to play a pivotal role in many diseases from Alzheimer’s to cancer. ROS production is increased in people who are overweight or obese, and is considered one of the reasons why weight gain is so damaging to the body.

But many ignore the fact that ROS are a normal and regular part of cell metabolism. Even when we’re healthy, we boost the production of ROS when we exercise and when we eat. As it turns out, we need them. They are important in a number of cellular pathways, including those related to programmed cell death (apoptosis), as they are a direct measure of how much energy is being created by a cell at a given time. Increases in ROS may actually be beneficial at the right times.

For example, one study found that if you up the ROS in mice being fed a high fat diet, you actually prevent them from becoming insulin resistant. Insulin resistance is the first step towards diabetes – it occurs when our bodies stop responding effectively to the insulin we release to store glucose uptake.

Over time, eating too much (especially too much sugar) leads to a constantly high insulin levels, and our bodies simply become less sensitive to insulin. ROS, as the researchers explain, are key in insulin signaling, and without them, our cells can’t respond efficiently to insulin.

“In the case of early type 2 diabetes and the development of insulin resistance, our studies suggest that antioxidants would be bad for you,” explains Tony Tiganis of Monash University in Australia.

Furthermore, increases in ROS are pivotal in the heart’s ability to prevent damage during a heart attack. If you boost ROS signals before a heart attack, it allows the cells to precondition and prevents later damage from oxygen deprivation. This pathway, including ROS, are being evaluated as targets for therapeutics and pharmaceuticals to reduce or prevent heart damage.

As with anything, ROS are healthy for you when they’re kept balanced by the body’s defensive enzymes and antioxidants. Natural, low-ish levels of ROS signaling, like that produced when you eat a good diet and exercise, is good for you. But get too much of a good thing – like when your body’s natural oxidation defenses break down – and it becomes a bad thing. Eating a variety of fruits and vegetables, packed with antioxidants, has been shown to improve the body’s ability to deal with ROS properly, improving all kinds of physiological parameters and aiding in the prevention or treatment of a wide variety of diseases.

Should I take extra antioxidants?

Increases in overall fruit and vegetable intake have shown to be great for our bodies, but this is likely due to the interplay between many different compounds. The jury is still out on whether supplementing your diet with specific antioxidants improves your health.

Clinical trials have had remarkable trouble finding actual benefits from supplementing diets with individual or even combined antioxidants. A vegetable or fruit is better for you because doesn’t just contain one or two antioxidants; it also contains a balance of vitamins, minerals and enzymes that are impossible to reproduce in pill form.

And more importantly, you can over do it. The line between healthy and unhealthy blurs when it comes to dietary supplementation with excessive amounts of antioxidants. For example, you smokers out there might want to watch your beta-carotene intake. Beta-carotene is an antioxidant, found in many vegetables including kale and spinach, and researchers had hoped that supplementing the diets of smokers with it and another antioxidant, retinol, would help prevent lung cancer.

But the reverse occurred – beta-carotene was found to actually increase the risk of lung cancer and death when taken as a supplement by those who were at high risk for the disease. Why it had this strong, negative effect is not fully understood, but it serves as a warning that over-supplementing isn’t a good idea.

Similarly, a meta-analysis of clinical trials involving Vitamin E found that high doses – >400 IU a day – increased risk of mortality. It’s likely that in both these cases, the excessive levels of antioxidants actually prevented the ROS from doing their job as signaling molecules, screwing up cellular signaling pathways including those that lead to cell death. Cells that don’t die when they should are at high risk for becoming cancerous.

You probably aren’t going to do yourself any damage by eating all the antioxidants you want – and, more likely, you’ll improve your diet. But don’t try and overdo it with pills. Cramming ten extra Vitamin C tablets isn’t going to do you any good. Antioxidants are better when they come straight from the source, as they exist in a form your body is prepared to use.

Studies have shown supplements simply don’t cut it, and super pills don’t replace eating a healthy, balanced diet with at least five servings of fruits and veggies a day. And in some cases, antioxidant supplements increase the risk of cancers, like beta-carotene did for smokers, and can be particularly damaging for those already on certain drugs.

If you really insist on taking supplement pills, be sure to talk to your doctor first and make sure what you’re taking is actually good for you and isn’t going to conflict with other medications. So-called nutritional supplements often tout amazing health benefits without any actual science to back them up.